Albanvale is a residential suburb 18 km north-west of central Melbourne and 3 km west of St Albans. Its western boundary is the Kororoit Creek, and its north and south boundaries face Kings Park and Deer Park respectively.

Albanvale has three public reserves, a linear park along Kororoit Creek and the Australian-Bosnian Islamic centre. Its census populations have been:

Albanvale is a multicultural suburb. Among the languages spoken at home at the 2011 census there were high proportions of Vietnamese (16.9%) and Maltese (3.8%). 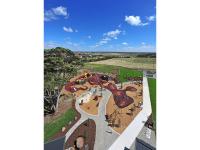