Allendale, a former mining town, has shrunk to a village which is 7 km north-east of Creswick and 105 km north-west of Melbourne. A town street network of about ten blocks is visible, with a scattering of buildings. It is thought that it was named after a village in Northumberland, England.

Allendale was a small village until the development of deep lead gold mining reached there from the south in about 1881. The Spring Hill lead and a subsidiary lead came together in the vicinity of Allendale. The railway line from Creswick to Daylesford opened in 1887. By then there was also a school (1881), two churches with large halls and ten hotels. Allendale was also known as Ristori Town, after one of the larger mines. Allendale was comprehensively described in the Australian handbook, 1903: 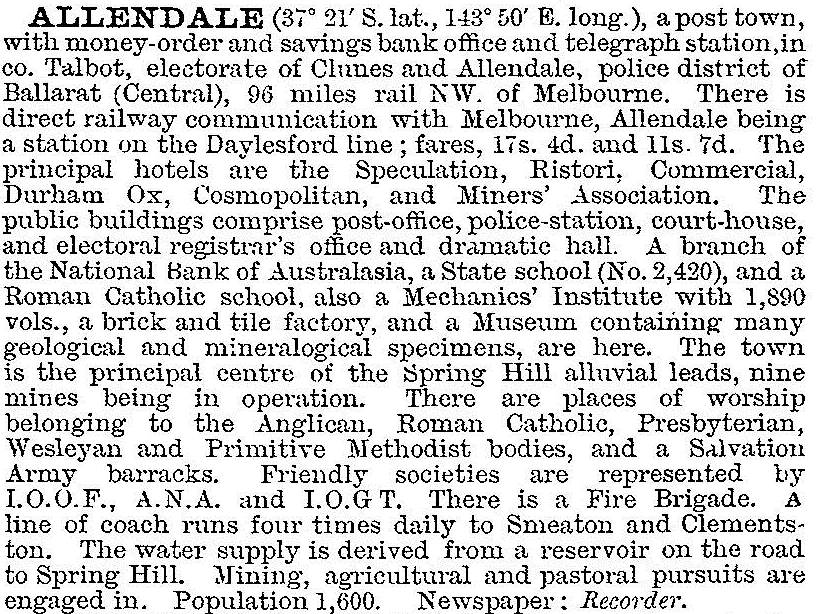 During 1910-20 mining ended and the remaining farming population supported just two hotels in 1921. A new general store was built, however, when an earlier one was burnt down in 1933. Apart from that building and the former school, post office and bakery, Allendale is mostly a scattering of timber houses and cottages. A reserve and a training track are just outside the old town. Numerous mullock heaps are around Allendale, but there is an avenue of trees.