Altona North is a residential and industrial suburb 11 km south-west of central Melbourne. Its southern boundary is Kororoit Creek Road (separating it from Altona). Its eastern and western boundaries adjoin Newport and Laverton respectively, and the West Gate Freeway passes through its northern sector.

The eastern part of Altona North is mainly residential, and has been known as Altona East. The earliest subdivision appears to have been inspired by Walter and Marion Burley Griffin, with a garden-city radiating street layout west of Hanson Street. The hub is a street called The Circle, where the shopping centre is positioned. The main radiating streets are The Broadway, The Highway (now McIntosh Street) and Marion Street. Subdivided in 1928, it remained virtually empty until the postwar years. In 1955 Gilbertson's abattoir opened on the east side of Kyle Road along with a smallgoods factory. A large employer, the abattoir drew home builders to Altona North. Altona East primary school was opened in 1960 and continued until 2009. Altona North primary school (1965) is about 1 km west (237 pupils, 2014).

Paisley is also in Altona North, notable for a railway station (since closed), a petroleum refinery, Bayside P-12 college (1972) and the Altona Lakes golf course on the site of the former briquette depot. The site also contains a swimming pool, soccer, tennis and lacrosse facilities and a bowling club. Between the golf course and the Altona North school there is a Catholic primary school (1972). In 2008 the redevelopment of the Bayside Secondary College site commenced, together with a merger of the Altona Gate primary school (1960) and Bayside College, with the campus becoming a Prep to Year 9 school.

The north-east corner of Altona North is industrial, including Don Smallgoods and a Toyota distribution centre. Altona Gate shopping centre (1977) is nearby, comprising a discount department store, two supermarkets and 88 other shops. Its area is 27,600 square metres. There is a library and other community facilities nearby.

Altona North technical, high and primary schools were opened between 1959 and 1965, the period of Altona municipality's most rapid population growth. St Pauls Catholic college was opened in 1965. The technical school was partly engulfed by a Bunnings store after closing in 1992.

West of Kororoit Creek Altona North has a large industrial area - warehouses, the Toyota assembly plant and petrochemical plants. The most northerly sector is residential, with linear reserves near the creek and a crematorium and lawn cemetery. One of the reserves has an historic bridge for the old Geelong Road where it crossed the creek. In February 2014 Toyota Australia announced that it would cease local manufacturing in 2017 with an estimated 2500 maunfacturing workers to lose their jobs at Toyota's Altona North plant.

Gilbertson's abattoir closed in 1996, and Gilbertson's subsidiary Don Smallgoods purchased KR Castlemaine in 2008 before announcing the closure of the plant in 2010 with the loss of 420 jobs. New residential development was slated for land around the Don Smallgoods site in Blackshaws Road after it was rezoned from industrial to residential use. Between 2016-31 an estimated 1550 new dwellings would be built.

The median house prices in Altona North and Altona East between 1987 and 1996 were lower than the median for metropolitan Melbourne.

Altona North's census populations have been:

The suburb's multicultural population at the 2011 census was reflected in languages spoken at home:

There are also Vietnamese and Maltese communities.

At the 2011 census the median income of Altona North's residents was 70% of the Australian median, up from 65% five years before.

K.F. Pearson, And ANTS it was: a history of Altona North technical school, Altona North, 1992 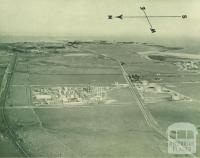 Aerial view of the Altona Refinery, 1949