Axedale is a rural township on the McIvor Highway immediately west of the Campaspe River and 20 km east of Bendigo. It was named after the Axedale pastoral run (1840), and is also near the Axe Creek which joins the Campaspe River. It is thought that the Axe River, Dorsetshire, England inspired the name.

Axedale is on the road between the Bendigo and McIvor goldfields, and was itself a minor goldfield in 1858. The Campaspe Hotel was opened (1855) and an early settler, James Doak, operated a steam flour mill during the 1860s. A Catholic school was opened at Axedale West in 1866.

A large Catholic community settled around Axedale, and was encouraged by Dr George Backhaus, an influential Catholic priest at Bendigo who donated land for a church at Axedale. The present St Mary’s church (1902) is an imposing structure substantially rebuilt with stone from the first church (1862). Axedale also has two cemeteries, one restricted to Catholic burials. Presbyterian and Anglican churches were opened in 1869 and 1913, the Anglicans having used the Presbyterian premises since they had been built. The government primary school was opened in 1870.

In 1903 Axedale was described in the Australian handbook:

Axedale is attractively situated on the Campaspe River, and has recently gained new housing. There are two wineries on the road to Goornong. It has a golf course, a public hall, a recreation reserve, a hotel, local water supply, and a sand quarry, in addition to a general store and an auto repair shop. Axedale was on the Heathcote to Bendigo railway (1888-1958) and there is a rail trail from Bendigo and Axedale for walkers and cyclists. The school had 60 pupils in 2014.

In 2009 the Axedale water treatment plant was upgraded and the town connected to the Bendigo water supply. In 2012 a new police station opened.

Axedale’s census populations have been:

Accent on Axedale, Centenary and Back to Axedale Committee, c1970

Tim Hewat, Bridge over troubled waters: a history of the Shire of Strathfieldsaye, South Melbourne, 1983 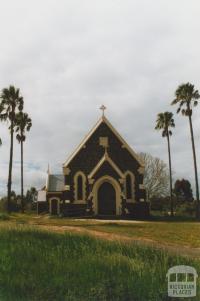