The Shire of Bairnsdale (1868-1994) was proclaimed on 14 July 1868. Centred on the town of Bairnsdale in East Gippsland, the area of the shire was decreased several times, with territory being taken by the neighbouring shires of Omeo, Tambo and Avon. The original area of 2980 sq km was reduced to 2278 sq km. The modern shire extended from the shores of the Gippsland Lakes north into the Great Dividing Range. It was roughly forty kilometres in breadth with the eastern boundary being the Nicholson River.

The northern part of the former shire was mountainous and heavily forested. Gold mining was carried on in many areas in the early days of settlement, but the main industry later was timber getting. The southern part of the shire supported agricultural and pastoral pursuits, including vegetable growing on the river flats. Due to the proximity of the Gippsland Lakes, tourism was an important industry.

Transport to the shire was Gippsland Lakes and coastal shipping, largely supplanted by the railway (1888) and an improved Princes Highway after World War II. In 1946 the shire was described in the Australian blue book:

The shire's administrative centre was Bairnsdale, even after 1967 when the urban area was excised to form the town of Bairnsdale. The town was proclaimed a city in 1990. In 1994 the shire and city were absorbed into the municipality of East Gippsland. In 1994 Bairnsdale Shire had 32,000 meat cattle, 5400 dairy cattle, 150,000 sheep and 38,150 lambs. The shire's census populations were:

A scene on the Mitchell River, Bairnsdale Shire, 1934 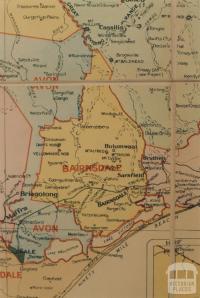