Barongarook is a rural village 10 km south of Colac in western Victoria. It is situated in the direction of the Otway ranges, and was on the Beech Forest railway line (1902-62).

The name arose from the Borongarook or Illimynte pastoral run, which was taken up in 1837 by Colac's best remembered pastoral pioneer, Hugh Murray. It is thought that 'Borongarook' was derived from an Aboriginal word meaning running water.

Barongarook was situated in dairying/grazing/potato-growing country, and was an area of many small to medium size farms. Schools were opened in 1876 and 1879, the latter named Barongarook Forest. Timber-getting was established, and a sawmill was opened at Barongarook in 1917. Another was moved to there in 1919 after being burnt out in the forest. There was also charcoal burning and an ironstone quarry. A small general store was built in 1921, but acquired for a Methodist church in 1925. The church continued until the 1980s.

Barongarook has a sawmill, a hall (1941) and a tennis club. The school had eight pupils in 2007, and became a campus of Lavers Hill P-12 college.

Bangarook's census populations have been: 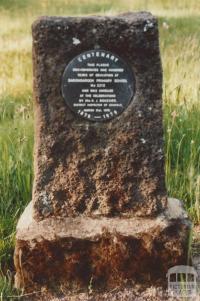