Bena is a rural village in south Gippsland, 100 km south-east of Melbourne and 8 km before Korumburra. It is thought that the name derived from an Aboriginal word describing the lyrebird. Bena was on the Great Southern Railway (1890-1993) and until 2008 when a bypass opened it was on the South Gippsland Highway.

Farm selections were first taken up at Bena in the late 1870s and a town survey was made in 1887 in anticipation of the opening of the railway. A father and son, Robert Fuller and Robert John Fuller, privately had a township surveyed on their land around the railway station. The town was named Cromwell, but the naming of the station and the school (1890) as Bena caused Cromwell to slowly disappear as a name.

The town was expected to be one of the main stations on the railway line. A bakery, coffee palace, store, butcher and large two-storey 40 room hotel were opened by 1890, to cater for the hundreds of workers employed on the railway construction. When the post office was opened in 1890 it was named Bena, thought to have been taken from Longfellow's poem Hiawatha. Bena, the Indian dialect word for pheasant, may refer to the lyrebird, probably common in the area.

By the turn of the century, the district was becoming a settled farming community, as shown by the 1903 entry in the Australian handbook:

There were closer-settlement farms around Bena before and after World War I. A butter factory (1893) was rebuilt after a fire in 1901 and took all the local dairy produce. Cream was brought in by rail and by wagon. When licensing conditions imposed building improvements on the hotel the most economic course was demolition in 1942. Like the hotel the butter factory ended in 1942, by being absorbed by the Loch factory. A Presbyterian Church was built in 1908 and an Anglican church was added to the town in 1937, transported from declining coal-mining town Outtrim. The next year the hall (1897) burnt down and was replaced the following year.

Entering the heyday of its farm production Bena formed a Young Farmers Club. It prospered through the war years until 1962. The churches closed in the 1960s and 1970s. The railway line was closed and the station has been demolished. The primary school continued until 2006. Sport is represented by the Korumburra-Bena Football and Netball Club. The area supports a dairy industry, including specialty cheeses made on-farm. 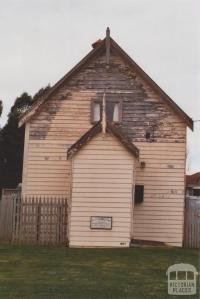