Bet Bet was the name of a rural village and of a shire, both on the Bet Bet Creek which joins the Loddon River at the Laanecoorie Reservoir. The administrative centre of the shire was Dunolly, which is 50 km west of Bendigo. Bet Bet village is eight km south of Dunolly.

The name is thought to have been derived from an Aboriginal word meaning place of red ochre. (The red ochre mine, however, was on a different creek from the Bet Bet.) The name was first given to the creek, and then to a municipal district (1861) which became Bet Bet Shire on 20 September 1864. Until 1915 the shire enclosed Tarnagulla borough, and until 1921 it enclosed Dunolly borough. Those boroughs were united with the shire when their populations declined with the passing of the gold mines. Both had been the centres of very rich gold fields.

In 1874 the Bet Bet railway station was opened with the commencement of trains on the Castlemaine to Dunolly line. Later there was a temperance hall (despite three vineyards in the district) and a Church of Christ (1866). In 1903 the Australian handbook described Bet Bet: 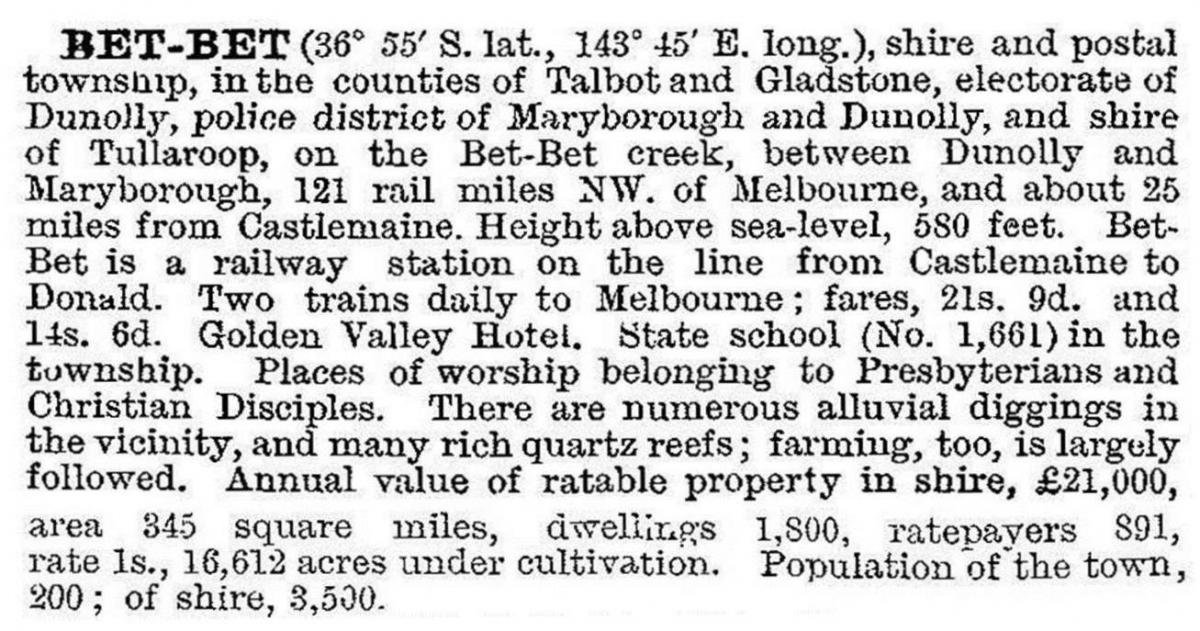 Bet Bet village slowly shrunk after 1910. The school closed in 1948, the Church of Christ closed in 1974, the railway station was destaffed in 1976, and the general store closed soon afterwards.

The shire's administrative centre was in Dunolly before and after the absorption of the Dunolly borough. In 1946 Bet Bet shire was described in the Australian blue book: 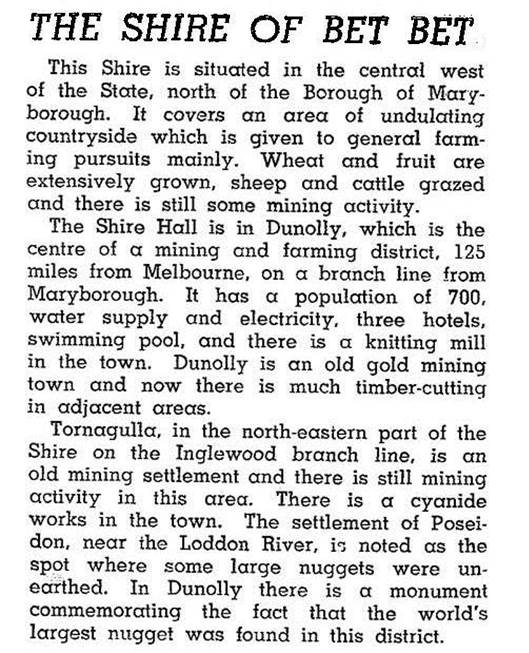 On 19 January 1995, most of Bet Bet Shire was united with Maryborough city and most of Tullaroop and Talbot and Clunes Shires to form Central Goldfields Shire. The balance of Bet Bet Shire went to Loddon Shire.

Bet Bet's census populations have been:

J.J. Alderson, Bet Bet: the growth and withering of a rural community, Havelock, 1984