Betley is a rural locality on the Bet Bet Creek, 9 km south-east of Dunolly and 140 km north-west of Melbourne.

Originally known as Middle Bridge (the other crossings were at Bet Bet and Eddington), Betley's name was adopted in 1910. The inspiration may have been Betley Village in Staffordshire, England.

The Middle Bridge school was opened in 1865, for the children of families who took up farms in the district. In the early 1900s gold was found at Middle Creek, a location outside the rich diggings which had been found at Dunolly. The find was enough to attract five mines, and nearly 100 children attended the school. Mining lasted for about ten years. In addition to the school there was a church and a mechanics' institute recorded in the Victorian municipal directory in 1912.

Betley is identified now by the old gold workings around it and the Betley Bridge. The school was closed in 1971. 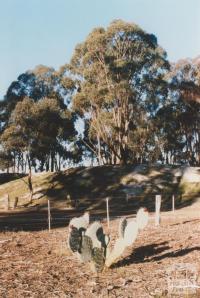