Birdwoodton is a rural locality in north-west Victoria, 10 km west of Mildura and 4 km south of Merbein. Cabarita is to its immediate east, overlooking Lake Hawthorn.

In 1917 blocks were made available south and east of Merbein for farming by discharged soldiers. As the blocks were taken up the soldier-settlers named the district Birdwood, in honour of General Sir William Birdwood, commander of the Gallipoli Anzac forces. The change of name to Birdwoodtown and Birdwoodton occurred during 1920-21, as the last of three allocations of blocks was taken up. The average size of a block was 6 ha.

Most of the farms produced irrigated dried fruits, mainly currants and raisins. A packing shed for the Mildura Co-operative Fruit Company was opened in about 1919 along with a general store. The packing shed closed in 1933, when motorised transport could carry produce over longer distances.

There was already a State primary school east of Birdwoodton, in the locality known as Cabarita. Named The Lake, after Lake Hawthorn, it was opened in 1906. As Birdwoodton expanded, there were additional schools at Merbein South (1913) and Merbein West (1920). In 1939 an Anglican Sunday school was opened in Mena Road, and in 1948 it was dedicated as a church. The Lake school’s enrolment fell to 6 in 1913, but in 2014 its enrolment was 218.

Birdwoodton has a recreation reserve and Cabarita has the Merbein Golf Club’s course.

W. Max Whiting, They battled for Birdwood, the author, 1997 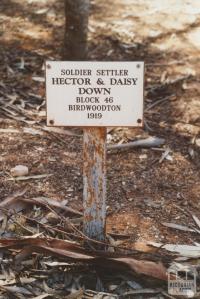 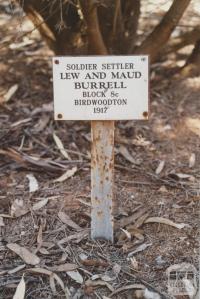