Boneo is a mostly rural district on the Mornington Peninsula, with Rosebud West to its north and Cape Schanck to its south. It is one of the peninsula's oldest districts, the name having derived from a short lived pastoral occupation, Boninyang, taken up by the Meyricks family in 1840. (The Meyricks soon moved west to a place near Somers on Western Port Bay, and Merricks was named after them.)

Boneo comprises a varied range of landscapes. Most of it is undulating grassed dunes, part of which are known as The Cups. Originally planted with native trees, harvesting for firewood and intense burning during the 1890s changed it into grassland, damaged by rabbit invasion. Poisoning, wire netting and introduced pasture completed the landscape's final transformation in the early 1900s. Further south is Cape Schanck, a basaltic coastline buffeted by Bass Strait. It was named after Captain John Schanck, the designer of Lieutenant James Grant's ship which was used to explore Bass Strait in 1800.

During the 1850s the Boneo area was subdivided for farm selections, and a light station was built at Cape Schanck in 1859 as part of the system of warning beacons for Bass Strait shipping. There had been fearful losses of life by shipwreck on the western coastline of Victoria and in the vicinity of King Island.

Schools were opened at Cape Schanck (1870-1921) and at Boneo (1871). Cape Schanck lighthouse was the local communications centre with a post office (1871) and a telegraph station, and there were several cottages for lighthouse keepers and a boarding house for visitors (1890s). Boneo remained as a farming community with the school, a hall (1870) and finally a general store in about 1920.

It has been the school and the adjoining public reserve which have become Boneo's community centre at the corner of Limestone and Boneo Roads. A successful community market of 200 stalls has operated each month on the third Saturday since 1977. Produce at some of the stalls reflects the changes made from grazing properties to market gardens. The change to rural/residential living is reflected in Boneo school having 300 pupils by 1999 and 367 in 2014.

The Cape Schanck locality has grazing properties, best represented by the Barragunda property. Barragunda homestead (1866) was built from locally quarried limestone in classically derived and Gothic revival styles, and is on the Register of the National Estate. So too are the lighthouse station and associated buildings. The rugged coastline is reserved as a linear park, linked to the southern side of Mornington Peninsula as far as Point Nepean and in the other direction to Greens Bush in the middle of the peninsula. There are numerous walking tracks and lookouts, and on the western side of Cape Schanck is Fingals Cave, so named after the vertical basaltic columns pierced with caves on the isle of Staffa of the Inner Hebrides, Scotland. (Fingal was a Gaelic hero.) Fingal beach is best approached only at low tide. 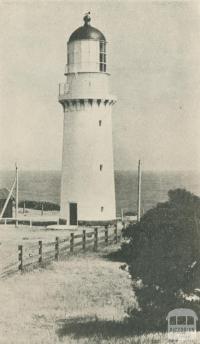