Box Hill South is a residential suburb 14 km east of central Melbourne. It is bounded by Canterbury, Middleborough, Eley and Elgar Roads.

Gardiners Creek flows south-westerly across Box Hill South, and the Riversdale Road (Wattle Park) tram was extended in 1928 to a terminus at Elgar Road. Both were to have a significant influence on Box Hill South.

In the 1880s much of the farmland along Gardiners Creek was owned by David Houston, and in 1885 he allowed the emerging plein air artists Tom Roberts, Arthur Streeton and others to have an artists' camp along the creek in the vicinity of today's Foch Street. It was the start of the so-called Heidelberg school of Australian painting.

The tram terminus' proximity to Box Hill South encouraged residential estates to its east in the 1920s. The Golf Links estate (1924) was the largest, incorporating much of the artists' camp landscape, next to the Box Hill Golf Club which is further east. It includes Birdwood, Foch and Kitchener Streets, famous names from World War I. A smaller nearby estate was Riversdale Heights (1926).

In 1927 the Box Hill South primary school and a local post office were opened. Some distance away from the new houses, a 24 acre property with a ten room house (1907) was sold for a new home for the Box Hill Grammar school, renamed Kingswood in 1965. The State primary school was also renamed, and is known as Roberts McCubbin (470 pupils, 2014).

Residential settlement along Middleborough Road on the eastern side of Box Hill South was a postwar development. There was also manufacturing industry, notably a Bowater Scott factory (1960). Crawford Productions television studio (1982) was nearby, and in 2005 its site was filled by a Bunnings warehouse. A short way south there are local shops and the Houston post office (1961).

There is a linear park and walking trail along Gardiners Creek, from Wembley Park in the north-east, past the golf course and coming out at the Bennettswood Reserve near Deakin University. 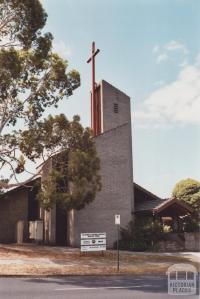