Broomfield is a rural village and former mining town 3 km north-east of Creswick, immediately north of the Creswick State Forest.

Like its neighbour, Allendale, Broomfield grew rapidly when deep lead gold mining was developed during the 1880s. Prior to then it was a village with a school (1873), a church and a small amount of mining dating from when gold was first discovered there in May 1872. That discovery led to the opening of the Spring Hill leads, one of the world's richest deep alluvial gold fields.

Broomfield was apparently named after an early resident, and it was also known as Wallacetown during its period of peak activity. In the mid-1880s there were three churches, three hotels and a railway station on the line between Creswick and Daylesford (1887-1976). The population was put at 1200 persons in the Victorian municipal directory.

Broomfield was at the southern end of the leads which ran generally north-west, and the decline in local mining and the township is evident from the description in 1903 in the Australian handbook:

By 1920 there were fewer than 150 people in Broomfield. The school was closed in 1948 and reopened in 1951 with ten children. The date of its final closure is unrecorded.

Broomfield has a scattering of buildings, including its last commercial building, the Wallace Hotel. There is a monument at the cross roads marking the 1872 gold discovery. 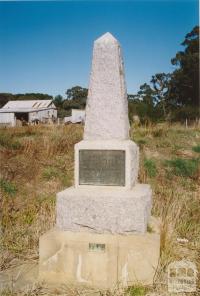