Buchan is 330 km east of Melbourne and lies in the valley of the Buchan River hedged by rounded limestone hills. It is reached by the Princes Highway and a 26 km drive north from Nowa Nowa.

Pastoralists first entered the area in the late 1830s. Buchan station, taken up in the 1840s, had a succession of owners. To the north were the Gelantipy and Black Mountain runs. The name Buchan is thought to be taken from an Aboriginal word Bukkan-mungie to which various meanings have been ascribed. One interpretation is place of grass bag. There were small groups of Aborigines in the area but their numbers declined rapidly after European settlement. In 1861, Reverend John Bulmer inspected land south of Buchan as a possible site for a mission station. When he moved to Lake Tyers, the remaining Aborigines accompanied him there. At Cloggs Cave near Buchan, evidence has been found of Aboriginal occupation in prehistoric times.

Land settlement began in 1870, with the best land along the river quickly taken up. A township was proclaimed in 1873, taking its name from the station. The Victorian municipal directory described Buchan in 1888 as a mining and postal village with a telegraph station. The district was suitable for grazing and mining, and famous for its scenery and extensive caves. Population, 85.

There was some interest in mining from the earliest days. Over the years, many companies were formed, mainly to mine silver, lead and gold. A few larger mines were profitable but most were shortlived. Marble had been quarried in the 1860s to build the Murrendale Park homestead. Commercial quarries operated from the early 1900s. Black marble from Buchan had been used at the Shrine and State Library in Melbourne as well as buildings in London, elsewhere in Victoria and other states. From the 1950s a quarry also produced crushed lime for agriculture, paper manufacture and other uses.

In 1903 Buchan was described in the Australian handbook:

The existence of the limestone caves was well known. In the 1880s the journalist ‘Tanjil’ described them in his Guide to the Gippsland Lakes and Rivers. But it was not until 1889 that they were surveyed. Development was recommended but it was 1900 before a local man, Frank Moon, was appointed as caretaker of the caves reserve. Moon explored most of the caves in the district, discovering the Fairy Cave in 1907. This dry cave with fine formations was opened for public inspection the following year. Royal Cave was opened in 1912 and by 1917 there were six caves open. Buchan became popular with tourists, who generally stayed several nights at one of the local guesthouses or hotels. In the 1920s, camping facilities were developed near the caves and regular bus tours began to visit.

On the river flats, crops such as wheat, oats and barley were grown, as well as some hops, maize, arrowroot and beans. Some dairying was carried on, at first for local consumption. Around the turn of the century, several cheese factories were established on larger farms and a butter factory operated for some years. In the 1970s milk was sent by tanker to Maffra. Sheep and cattle grazing increased as settlement spread. Cattle sales began in Buchan about 1901. Closer settlement of the farming land meant more demand for services, so that by 1938 the Victorian municipal directory described the settled township:

The caves were closed during the war years, reopening in 1946. In 1984 the Shades of Death Cave at nearby Murrindal was opened for public inspection and adventure cavers explore many of the wild caves in the area. Over 100,000 people visit the caves annually. The spectacular scenery of the nearly Snowy River, whitewater rafting and trail riding also bring tourists to the area. Also there are three alternative lifestyle communities north of Buchan.

Buchan has a hotel, general store, hall, two churches and a school (28 pupils, 2014). The caves reserve, immediately west of the town, has three campsites and a swimming pool. The whole reserve and many of its structures are heritage listed. Flooding affected the caves reserve in 2012. The Buchan Caves Hotel was destroyed by fire in 2014. South of the town there is the Canni Creek reserve where there is the Buchan Valley golf course and a racecourse which is the venue of the annual Buchan and Gelantipy race meeting.

Buchan School no 1905: a brief history of Buchan district and schools prepared for the Buchan School Centenary, 1977 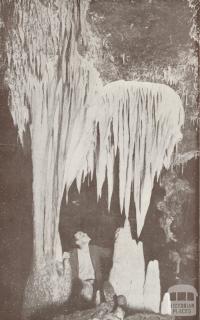 Giant White Stalactites and Stalagmites in the Fairy Cave, Buchan, 1934 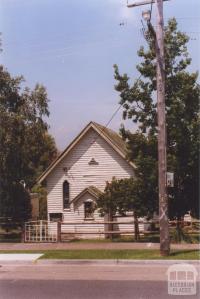 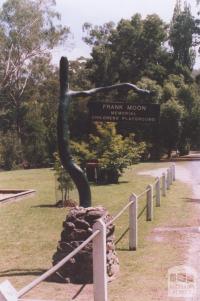 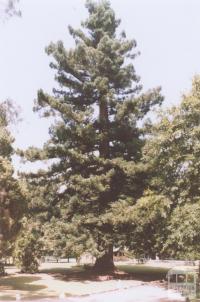 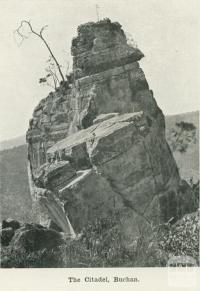 The Blankets in Fairy Cave, Buchan