Buffalo River is a rural locality in north-east Victoria, situated on the western side of the Mount Buffalo plateau and 8 km south of Myrtleford.

The Buffalo River runs northwards from alpine areas between Mounts Despair and Selwyn and enters the Ovens River a few kilometres west of Myrtleford. It occupies an agriculturally rich valley about 2 km wide.

Farm selections were taken up along the Buffalo River in the early 1870s and a school was opened in 1875. Some farmers took irrigation water from a river tributary, Nug Nug Creek, which runs off the Buffalo plateau. The farm community maintained a population of around 200 people for most of 1900-60. In 1965 a dam was built on the Buffalo River for augmentation of water supply for Wangaratta and for farm irrigations in the Ovens Valley.

Buffalo River’s census populations have been: 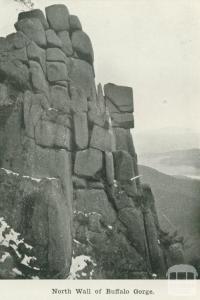