Buloke Shire (1995-) is in north-western Victoria, occupying parts of the Mallee and Wimmera areas. It was created on 20 January 1995, by the union of Birchip, Charlton, Donald, Wycheproof and a small part of Kara Kara Shires. Its area is 8020 sq km and its administrative centre is Wycheproof.

The shire's name came from Lake Buloke, near Donald. 'Buloke' is sometimes thought to have originated as the name of a tree known as bull oak, a species of Australian casuarina, and bull oak casuarina are found in the shire and around Lake Buloke. The connection, however, is probably incorrect, as the name of the lake is most likely to have come from the Aboriginal word of similar pronunciation meaning place of frogs (compare also, Lake Bolac, south of Ararat). In any event, Buloke Shire has both the lake and the similarly expressed Indigenous 'bull oak' as inspirations for its name.

The shire is traversed in a generally north-westerly direction by the Calder and Sunraysia Highways, which are more or less parallelled by railway lines to the Mallee wheatlands. The line parallel to the Sunraysia Highway goes to Mildura. Streams in the shire flow northerly, emptying into Lakes Buloke (Richardson River), Tyrrell and Lalbert. They have been used for watering livestock, but pastoral activity has relied on the stock and domestic water channels supplied from the Grampians and the Waranga Western Channel.

Since its creation the shire has had a declining population, and at the 2011 census the median age of residents was 48, compared with 37 for Australia.

Farm activity has reduced Buloke woodlands to about 3% of their original area, and many of the areas left are degraded. The woodland type is listed as endangered.

The shire's census populations have been: 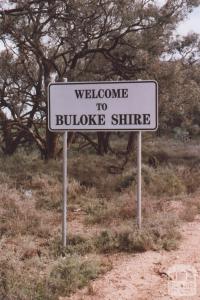