Bundoora is an extensive suburb comprising residential, community service and educational areas 15 km north-east of central Melbourne. It is bordered on the west by the Darebin Creek and on the east by the Plenty River, Greensborough and Macleod (going from north to south).

The name comes from Keelbundoora, the parish enclosing Bundoora and adjoining areas. Bundoora is thought to be Aboriginal for a plain where kangaroos live, where one may camp or top of a plain. Land subdivided into about 400 hectare lots was auctioned in 1838, and a census three years later showed that most areas were being farmed.

The first centre of settlement in Bundoora was Janefield, on Plenty Road, in the north-east of the present suburb. The name is thought to be an acknowledgement of the burial place of Jane Brock who died in 1851. She was the wife of James Brock who was the son of John Brock who bought a flourmill on the Plenty River at Janefield. The mill was important because much of the lightly forested land was suitable for wheat. A Church of Scotland was built on Brock's land and a school incorporated with it in 1848. There was also an inn and a post office (1853).

Janefield township was virtually abandoned after closure of the mill (1862) and school (1877), and agricultural pursuits continued until 1912 when the Victorian Government acquired the land, which it rented to the Red Cross Society in 1920 as a sanitarium for tuberculosis patients. Thus began the complex of buildings and grounds which became the Janefield Colony for children. The Special School was opened in 1937.

The readily cultivated land attracted more settlers, and stone for quarrying was found in the Bundoora area. However, Bundoora's relative remoteness from Melbourne (the railway lines running some way either side of it), attracted Government attention. In 1906 the State Government acquired land for closer settlement, but eight years later introduced a completely new consideration by acquiring land for the Mont Park hospital/asylum. A spur railway line was built from Macleod. In 1924 the Federal Government acquired land for a Repatriation Hospital to accept servicemen sufficiently recovered from nervous disorders who had been treated at Mont Park. In 1942 Laurundel was built to replace the Kew Mental Hospital. The institutions had extensive grounds convertible to farming purposes, and during World War II the Women's Land Army trained its members in farming techniques at Mont Park.

Home building blocks became available after World War II, and their cheapness attracted many new immigrants who tolerated dwellings with few rooms and, in some cases, lack of water supply. The institutions provided local employment. The urban community was small (the 1954 census recorded 240 persons), and significant growth only followed the formation of the Progress Association in 1960.

In 1965, 200 hectares of land was excised from the Mont Park Hospital for the site for La Trobe University, which opened two years later. In 1972 the Phillip Institute of Technology was opened. Various primary and high schools opened as population flowed into the residential areas – Greenwood primary and high schools (1967 and 1971) – and the RMIT Bundoora campus at Bundoora's extreme north.

Parade Catholic College moved to a site on Plenty Road in 1964 which formerly had been a Christian Brothers training institution. The Brothers farmed the land and won dairy herd prizes at the Whittlesea Show until the 1970s, and their stud was sold in 1983.

Bundoora primary school had 211 pupils in 2014, and Bundoora secondary college 470.

The Plenty Road tram was extended to Bundoora south (La Trobe University) in 1983, to Settlement Road in 1987 and to McKimmies Road (Bundoora north) in 1995.

Bundoora north has a shopping centre on Plenty Road and several public reserves. At its extreme west is the Darebin Creek, near which is the Norris Bank primary school. It was opened in 1919 as the Thomastown Small Holdings school, Thomastown being on the other side of the creek.

In Bundoora's south-west the psychiatric and rehabilitation hospitals' sites were closed. The repatriation site was used for housing, with a geriatric facility on its east and Mount Cooper (137.3 metres) on its west. Mount Cooper is in Bundoora Park, which includes the heritage listed Bundoora homestead (1900) and a heritage village. The redevelopment of the psychiatric site comprised houses and the Strathallan golf course.

Bundoora's rural origins are reflected in its early census populations:

Len Kenna, In the beginning there was only the land, Lions Club of Bundoora, 1988 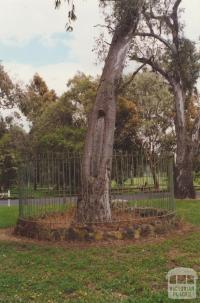