Byaduk is a small village, 24 km south of Hamilton on the main Hamilton to Port Fairy road. It was officially surveyed in 1867 as the township of South Byaduk in the Parish of Byaduk, in the County of Normanby. The name Byaduk is believed to originate from the Aboriginal word for a stone tomahawk.

Located at the crossing of Scotts Creek, Byaduk developed as a village in the 1860s in response to land selection for farming purposes following the breakup of extensive local sheep runs. The area attracted a Lutheran community as early as 1857. A store was established in 1863, and in 1865 a steam driven flourmill was erected and operated into the early 1900s. Other major structures included a Methodist church (1864), a school a year later, a creamery in 1892, a mechanics' institute gazetted in 1900 and a new Lutheran church in 1902. Byaduk was described in the 1903 Australian handbook:

The first decade of the twentieth century was the most significant for Byaduk following the building there of the Condah Swamp butter and cheese factory which was the death knell of the Hamilton butter factory. Despite the closing of the mill in the early 1900s and butter factory in 1938, Byaduk remains a local focus for social activities with its golf course, former school building – closed in 1985 – sports oval, a public swimming pool, community hall and tennis courts. For many years the hall has hosted the annual Byaduk flower show during November. The locality holds some significance for its proximity to major geological features.

Three kilometres north of Byaduk the main road crosses the 7200 year old basalt lava flows which originated from Victoria's youngest volcano, Mt Napier, 13 km to the north-east. A little further towards Hamilton, Christies Road heads west over a ridge capped with much older basalt approximately seven million years old. As the road dips into the valley of Lyne Creek, there is a quarry on the south side where fossilised sea shells relict from early marine incursions have been extracted and used for liming paddocks. The floor of the Lyne Creek valley is lined with a back flow of lava from the main Mt Napier flow. It exhibits several tumuli: collapsed lava blisters formed in the roofs of main lava tubes by sudden surges in the volcano's output or gas accumulations.

Slightly to the north of North Byaduk, Caves Road leads east and south to an area of the Mt Napier flows where, due to roof collapse, vast buried lava tubes are now revealed as great caverns.

Population censuses for the village show its expansion in the early 1900s, with some reduction to the present day: 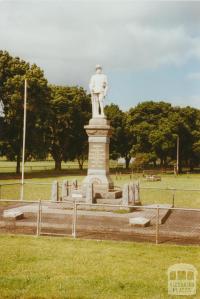