The settlement of Cabbage Tree Creek is located on the Princes Highway, 27 km east of Orbost in East Gippsland. The creek, which flows through undulating forest, takes its name from the patches of Cabbage Fan palms growing along its course. These palms are normally only found in subtropical rainforests in New South Wales and Queensland. Botanist Ferdinand Von Mueller visited the area to inspect the palms during expeditions in 1853-54 and 1854-55. A government act was passed in 1871 for their protection and in 1886 the Tambo Shire reserved about 100 acres of palms. Naturalist W. Baldwin Spencer visited the colony in 1889 and the reserve was extended to 8500 acres.

The first white settler arrived in the valley in 1887 cutting a dray track from Marlo to the south-west. Several families cleared the alluvial flats, growing maize, peas and beans and raising pigs, cattle and sheep. Later the farmers milked cows, sending cream to Orbost. In the late 1890s, small quantities of alluvial gold were found in the creek.

A school commenced classes in 1913, but enrolment was small and at times the school operated part time with several other small schools in the area. The school building served as a hall for the district. From the 1920s the Cabbage Tree Hotel catered to drivers on the improved Princes Highway.

About 1946 two sawmills commenced operations at Cabbage Tree Creek, and the Forests Commission ranger was stationed in the area. The increased population allowed the school to have more teachers and make improvements. In 1953, a new prefabricated building was erected on a new site. However, by the 1970s employment in the timber industry was unstable and the population decreased. By 1974 the school again had only one teacher and eventually closed in 1993.

The Cabbage Tree Creek Flora Reserve is part of the Baldwin Spencer Trail, a driving tour through areas of East Gippsland forest.

Cabbage Tree Creek has a general store, a hall and several houses. In 1999 a resident, Craig Ingram, was elected as an independent parliamentarian for Gippsland East and, along with two other independents, caused a change of State government from non-Labor to Labor.

Census populations for Cabbage Tree Creek have been: 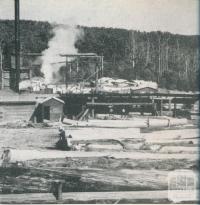