Canterbury is an older residential suburb 10 km east of central Melbourne, noted for spacious residences. It adjoins Camberwell on its east and north, and its early settlement and subdivision into market gardens and orchards accompanied Camberwell's. Canterbury was named after Viscount Canterbury, Governor of Victoria, 1866-73. Before being named Canterbury the area was part of Balwyn.

When the railway was extended from Hawthorn to Camberwell in 1882, and to Canterbury and beyond the following year, residential subdivisions were stimulated. The Canterbury landscape was undulating, elevated to the east and, with the West Creek, pleasantly well watered. The late 1880s saw good land prices and speculative profit. Melbourne merchants and professionals built in Canterbury and commuted by train to Melbourne. By 1891 nearly all of Canterbury was subdivided for housing, but still mostly not built on. A shopping strip was built along Maling Road beside the railway station. In 1903 Canterbury was described in the Australian handbook:

There was a bicycle rubber factory and brickworks, although two years later the local Council banned quarrying.

During pre-war years the Canterbury shopping centre was well served by district bus services. By the 1960s the services had diminished, and the Canterbury Road part of the shopping centre was perceived to be a haven for second-hand retailing and therefore in decline. Maling Road was also in the doldrums, but by the 1970s it was undergoing renewal as a destination for gift shops and pleasant eateries. It was later successfully promoted as a tourist destination.

Canterbury's large nineteenth century houses have provided premises for several nursing homes, benevolent organisations and a war time RAAF centre ‘Frognall’, which was returned to private ownerships in the 1990s. Frognall, mansion built in 1889, is heritage-listed. Other heritage buildings are the Shrublands Italianate mansion (1863) in Balwyn Road and a former hotel, Canterbury Mansions, built in 1889 near Maling Road. Not heritage-listed, but well known, is a one time neighbourhood shop used for the popular television series The Sullivans during 1976-83. The shop was in Matlock Street.

In and around Canterbury there are numerous retail and small businesses dealing in home furnishing and decoration, which reflect residents' fascination with keeping the Victorian or Edwardian appearance of their houses and gardens. In Monomeath Avenue, noted for its homes and gracious streetscape, several residents in 1995 successfully resisted a proposed multi-unit development on a home site sold by a former Premier of Victoria.

Canterbury's census populations have been: 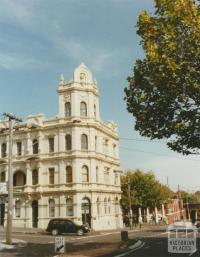