Chiltern is a township on the Hume Highway in north-eastern Victoria, 35 km from Wangaratta and midway between there and Wodonga.

It is situated on the Black Dog Creek, and began as the Black Dog township. In 1845 a Black Dog Inn was opened near where the creek crossed the Melbourne-Sydney Road, and in 1851-52 a government surveyor mapped out a township on the creek. There are forest reserves encircling the township from the north-west to the south-east and it is possible that a local settler imagined a resemblance to the Chiltern Hills, England. In any event, during 1853-54 the name was changed to Chiltern, and township lots were sold in June 1854.

In 1858 gold prospecting was carried out in the Indigo Creek area, north of Chiltern. By February 1859, a prospecting party was active in the valley in which Chiltern lies. Several rich leads in the direction of Chiltern were being worked by the end of the year. Following township land sales in 1861, Chiltern was proclaimed a municipal district (in effect, a borough) and a council was formed in 1862.

In 1859 when the Chiltern goldfields was known as New Ballarat a local newspaper began publication. Known as the Federal Standard, its printing office was built of locally made bricks in 1861-62, and it continued publishing until 1970. The building is one of seven in Chiltern on the Register of the National Estate.

By the mid-1860s Chiltern had pastoral agricultural and mining activities, mining and police courts, an Athenaeum and literary institute, churches and schools conducted by the Anglicans, Catholics and Presbyterians, a Baptist Meeting House, friendly societies, banks and insurance agencies, and numerous hotels.

During the 1870s Dr Walter Richardson lived in Chiltern with his family. His arrival coincided with a temporary decline in gold mining, and decreasing numbers of patients and the doctor's mental illness resulted in a short-lived practice. However, the house where he resided and his personal misfortunes are recorded in Henry Handel Richardson's, The fortunes of Richard Mahoney. The family house, Lakeview, is on the Register of the National Estate and contains Richardson memorabilia. Chiltern is depicted in the novel as Barambogie, the name of an early pastoral run. (The lake, which the Richardson house overlooks, was formed by the subsidence of a mine.)

On 15 May 1874, Chiltern was proclaimed a shire, just as the railway passed through the town, joining Melbourne to Wodonga. In 1903 the Australian handbook described Chiltern: 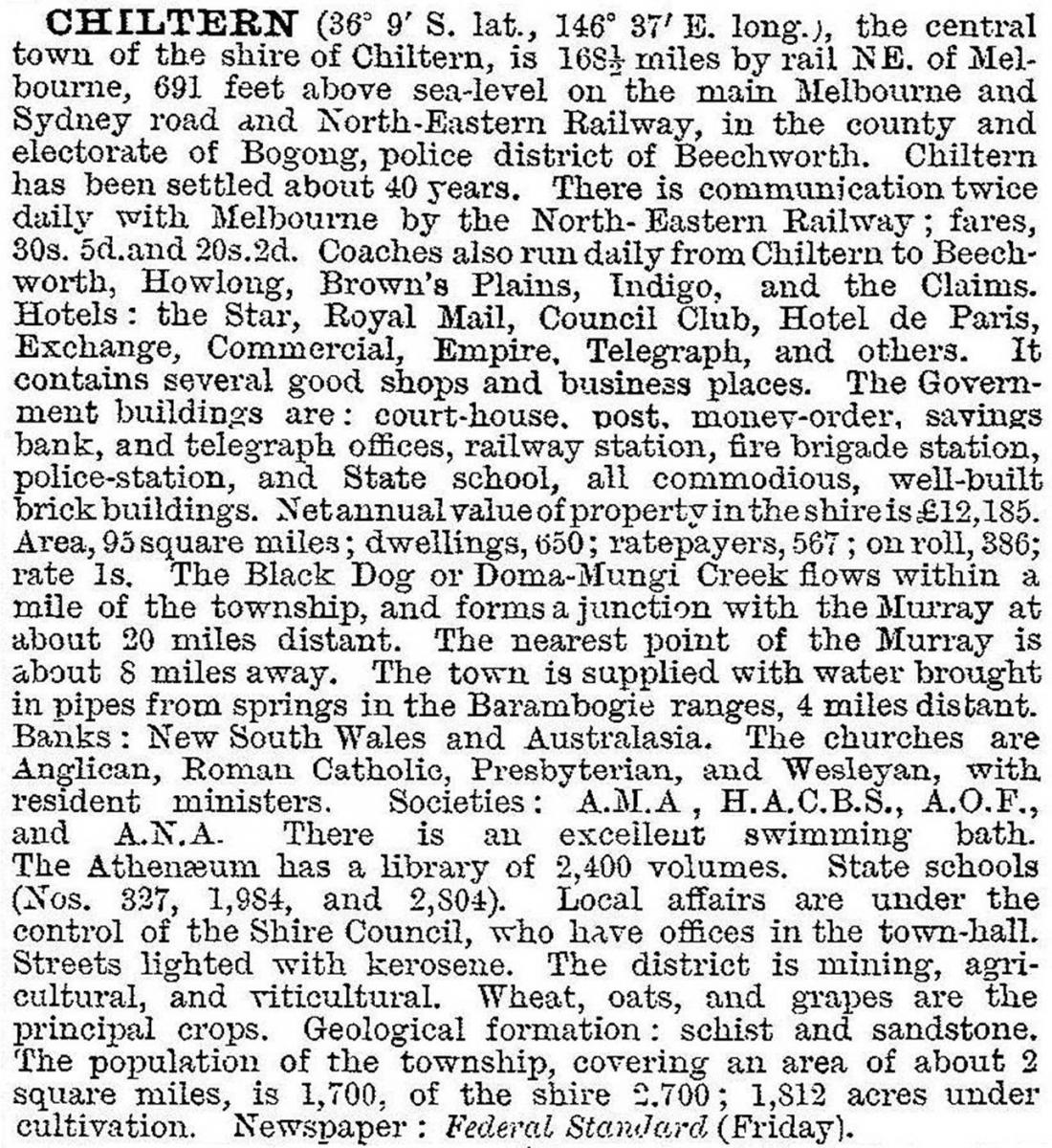 In 1911 several quartz mines were closed and in 1920 the Chiltern Valley mine was closed. The cessation of mining enabled several areas of land along Black Dog Creek to be released for sale, but good land remained scarce because of the preponderance of box forest country. During the 1930s some farms were amalgamated. The shire's main source of population growth was additions taken from surrounding shires between 1913 and 1917. In 1946 the Australian blue book described the shire: 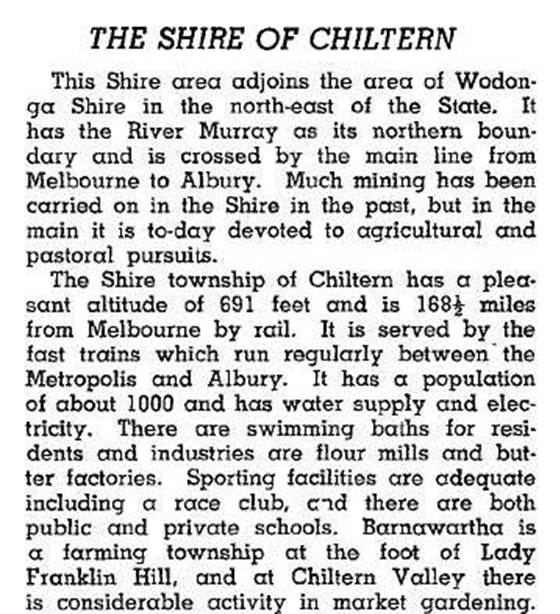 Chiltern retains a great many of its gold-era buildings, comprising residences, shops, churches, banks and civic facilities. They make it particularly attractive for visitors, and the National Trust was active during the 1970s in preserving the newspaper office, Lakeview and a pharmacy which contains a comprehensive collection of nineteenth century fittings and equipment. The town has been used as a location for making several films. The Star Theatre and Grapevine Hotel (1866) form an extensive suite of registered buildings. The court house (1865), the Anglican and Uniting (former Presbyterian) churches (1875) and the railway station (1875) are also heritage-listed.

Within a few kilometres westwards of Chiltern there were gold-era villages, including Durham, Cornishtown and Chiltern Valley. The box ironbark forests comprise a regional park of 4300 hectares north and east of Chiltern. They are a habitat for several rare bird and animal species (regent honeyeaters were released into the forest in 2010 and 2013), and contain ruins of the Magenta Mine, the Cyanide Dam and the Indigo Cemetery.

Since the 1970s when the growth of Albury and Wodonga was promoted, the population of the Chiltern township has grown. In addition to its own attractions, Chiltern is close to the Rutherglen wine region, the Murray River and the Hume Freeway. The shire's farming is mainly pastoral: in 1994 there were 13,000 meat cattle grazed and 34,000 sheep and lambs. About 55% of the shire's 502 square kilometres was farmed.

Chiltern's census populations have been:

Robert W.P. Ashley, History of the Shire of Chiltern, 1974