Clarinda is a residential suburb near Clayton South, 17 km south-east of Melbourne. As a place Clarinda predates Clayton South, a Presbyterian church being opened there in 1886. At that time the place was known as Bald Hills, a name preserved to the present day in the Bald Hills reserve.

Clarinda, predominantly an elevated sandy location, provided a view of Port Phillip Bay. It had a mixture of market gardens (on the better soil) and open heath lands. When a primary school was opened in the church in 1899 within a year it was renamed Bayview, to avoid confusion with Bald Hills in the Ballarat area. The name was finally changed to Clarinda in 1912. The census population in 1933 was 189. Clarinda continued to be a market gardening area with the typical post office, school and church until the mid-1950s when residential housing began to be built. A golf links was overtaken by housing. Additions were made to the school in 1953 and 1957.

Clarinda has a small drive in shopping centre with a library, a community centre, a Catholic church and school (1981) in addition to the early church and primary school (260 pupils, 2014). In the south-east corner of Clarinda there is the Heatherton Christian College (1999). Former sand quarries in the south of Clarinda are used for waste disposal and recycling.

Clarinda’s census populations have been: 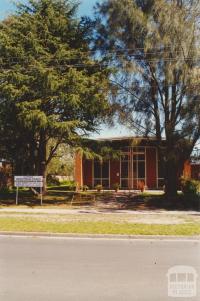