The Dandenongs, or more accurately the Dandenong Ranges, are a favourite tourist spot centred on Mount Dandenong (633 metres) about 34 km east of Melbourne.

It is thought that the name Dandenong was derived from an Aboriginal word meaning high or lofty, and in 1837 the ranges’ main (south-westerly) watercourse was named Dangynon Creek. By 1840 the spelling was changed to Dandenong.

Mount Dandenong and its adjoining summits form a west facing range, rising up from the relatively flat terrain of Bayswater. The summits are surmounted by television transmission towers and tourist lookouts. The ranges extend eastwards, joining the Dividing Range. Four streams have their headwaters in the Dandenongs: Olinda Creek and Woori Yallock Creek, both ultimately joining the Yarra River; and the Dandenong Creek and its tributary the Monbulk Creek, flowing south-west and emptying into the Patterson River at Carrum. Annual rainfall is up to 1200 millimetres, nearly twice that of central Melbourne.

The northern and southern boundaries of the Dandenongs are generally defined by railway corridors. Beginning from Ferntree Gully, the southern corridor comprises the electrified line to Belgrave and then the narrow gauge tourist line to Emerald. The northern corridor is the Lilydale line and the discontinued line through Mount Evelyn and Seville to Warburton.

The Dandenongs enclose numerous small localities and townships. Some began as village farm settlements, supplemented by holiday retreats and weekenders as rail and motor car transport put them within reach of Melburnians during the interwar years. Some weekend houses became permanent abodes during the post World War II housing shortage and bus services took workers to railway stations. Suburbanisation was signified by the building of the Upwey High School (1944).

The Dandenongs have several forest reserves. Ferntree Gully National Park (1928) has been incorporated with the Dandenong Ranges National Park, which also includes the former Doongalla Forest serve on the west face of the ranges below the television towers. The Olinda State Forest is in the eastern part of the Dandenongs, overlooking Silvan Reservoir. In 2012 the Kokoda Memorial Terrace was opened in the Dandenong Ranges National Park which continued the history of a Kokoda memorial in the Park, which began in 1996 with the installation of commemorative plaques and the establishment of the 1000 Steps.

Michael Jones, Prolific in God’s gifts: a social history of Knox and the Dandenongs, Sydney, 1983 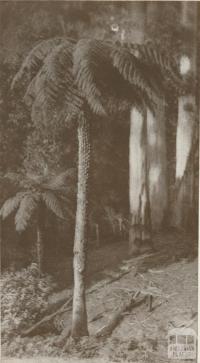