Dartmoor, a rural town, is on the Princes Highway about midway between Heywood and the South Australia border. It is situated on the Glenelg River.

The Dartmoor area was explored by the New South Wales Surveyor-General Thomas Mitchell, during his Australia Felix expedition in 1836. Mitchell established a camp, named Fort O’Hare after his commanding officer in the Peninsular War (1808-14), upstream of Dartmoor. From there he explored the Glenelg River downstream to the coast.

Pastoral settlement began with the Woodford pastoral run (1845), and in 1846 the Woodford Inn was opened beside the Portland-Mount Gambier road where it was crossed by the river. The place did not grow as a significant settlement, although there was a police post and a customs office because of the proximity of the inner-colonial border.

A school was opened in 1864, becoming a Common school in 1871. Additional settlement followed, but not in significant numbers until 1901-17. In 1903 Dartmoor was described in the Australian handbook:

The Victorian municipal directory (1910) recorded Dartmoor as having a hotel, three churches and the school. The railway was extended from Heywood to Dartmoor and the South Australian border in 1916-17.

In 1936 Dartmoor celebrated the centenary of Mitchell’s exploration, and its souvenir program recorded a general merchant, a grocer’s store, an agricultural and pastoral society, a progress association and several sports clubs. A centenary ball was held in the Dartmoor public hall and celebratory services were held in the Anglican, Catholic and Presbyterian churches. A prominent landscape feature – pulp wood plantations – had been established.

Dartmoor has a golf course on the river flats east of the town, a recreation reserve, a bush nursing centre, a bowling club, a hall, a school (20 pupils, 2014) a local museum, a general store, a hotel and Anglican, Catholic and Uniting churches. Wood from the Atlantic Cedar trees avenue of honour (1918) has been made into nine tree carvings of service men and women. The railway line’s services were suspended in 1995. The Dartmoor Timber Mill (1954) closed in 2008.

Dartmoor’s census populations have been: 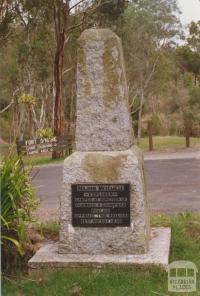