Eddington is a small rural township on the Loddon River, 22 km north-west of Maryborough and 12 km east of Dunolly. The Laanecoorie Reservoir (1890) is north of the township.

It is thought that the place was named after Captain John Eddington who settled there for a few years after 1838. (The longer term pastoralists who pioneered the district were the Simsons, who are remembered by a locality name and Simsons Ranges to the south).

The first land sale at Eddington was in 1857. It had good agricultural land along the Loddon River flats. By 1865 there were a brewery (1863), an agricultural society, a flour mill, Primitive Methodist, Anglican and Presbyterian churches, a school (1862) and two hotels. During the 1880s a mechanics’ institute and a cheese factory were opened.

In 1890 much of the productive river flats was inundated by the Laanecoorie Reservoir, which also caused the brewery to close and the racecourse to be moved. Eddington was described in 1903 in the Australian handbook:

The cheese factory closed in 1900, and the handbook’s concluding reference to wheat growing summed up the district’s changed agricultural potential. After the 1920s Eddington’s population was under 200. The hotel closed in 1940, the Methodist church closed in the 1950s and only the Presbyterian (later Uniting) church continued after 1972. All three church buildings were standing in 2010. The school closed in 1992 and is used as a residence.

Eddington has a road house, a community centre, tennis courts, a horse track, and a lucerne mill on a farm property. A golf course was revived by local effort and is known as ‘Royal Eddington’. Eddington’s census populations have been: 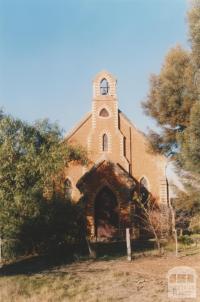 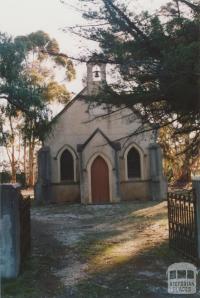