Fish Creek is situated among undulating hills on Fish Creek, so named for its many blackfish, 160 km south-east of Melbourne.

Land was selected in the densely forested hills in the mid-1880s. As clearing progressed, dairy cattle were grazed and potatoes grown on the rich soil. The railway line from Melbourne into South Gippsland was to pass through the district and once construction began, the settlers were able to sell their produce to the large workers’ camps.

Land for the township was severed from a selection between the railway line and the creek. When the line opened in 1892, there was one building which served as hotel, post office and general store. A school had commenced in 1890. There were a number of sawmills in the district, some with tramlines to the railway station.

A cooperative creamery was established in 1900. Soon it was taken over by a company, producing butter under the brand ‘Greenshields’. The former butter factory is in Falls Road. Pigs were raised in conjunction with dairying and were sold to the bacon factory at Dandenong. The first saleyards were built before 1900 and markets were held regularly. By 1921, the Victorian municipal directory described a growing township set in a dairying district. Fish Creek had a State school, a post and telegraph office, church, coffee palace, butter factory and creamery, sawmill, hotel, store, mechanics’ institute and two bank branches.

After World War I over 50 soldier settlers were allotted blocks in the district, but few were successful. During the later 1920s and early 1930s many Italians worked in the district, some settling permanently. During World War II Italian prisoners of war were kept as workers on farms at Fish Creek. A number of Dutch farmers moved to the area during the 1950s. Potatoes were still an important crop, but dairying was the mainstay of the district. By the 1960s milk was collected from farms by bulk tanker. After a merger the Fish Creek butter factory ceased production in 1967 and milk was transport to Toora and Leongatha.

The town serves a prosperous dairying district, with hotel, hall, school (93 pupils, 2014), post office, Union and Catholic churches (1904), stores, businesses and sporting club and facilities. A caravan park and motel accommodation at the hotel cater to travellers to coastal resorts and Wilson’s Promontory nearby. The former railway line (1891-1994) is now a rail trail. A strong art group has flourished since 1982 and there is a glassworks, a pottery and an art gallery in the vicinity.

Census populations for the Fish Creek district have been:

Bryan Fitzgerald, A tale of Greenfield’s to Fish Creek, Dumbalk, 1980 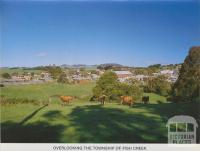 Overlooking the Township of Fish Creek