Geelong North (called North Geelong in the census) is a residential and industrial suburb on the west side of Corio Bay. It is separated from Geelong by Geelong West. Its northern boundary, Cowies Creek, separates it from Norlane, the site of the Ford Motor Plant (scheduled for closure 2016).

The Melbourne to Geelong road passes through Geelong North, and by 1854 a hotel and a general store were opened there. The railway line (1857) runs beside the road and the Geelong North station or stopping place was opened within a few years. An independent church opened in 1861, three subdivision estates were opened west of the railway line by 1864, and a school was opened by the church. It was replaced by a State school in 1877.

North Geelong's industrialisation began with the Geelong Gas Works in 1860, near the railway station. Industrial growth was concentrated soon after 1900 with the Oriental Timber Company's mill (1908) and the Federal Woollen Mill (1909), which rapidly grew as a source of employment making uniforms during World War I. It was joined by a meat freezing works, a fertilizer plant, a glass works and storage and bulk loading facilities for wheat on Corio Bay, port of Geelong.

The residential community grew with several churches rebuilding or being established soon after 1900. A North Geelong football club (1876) moved from the Geelong Council's abattoirs paddock to Osborne Park in 1919. Osborne Park adjoins the historic Osborne House which overlooks Corio Bay. Built in 1858, the eleven roomed, two storey stone house has been a residence, Harbor Trust building and Corio shire offices (1937-93). Another similarly located notable house is St Helens (1850), later becoming the Stella Maris Convent of Mercy (1930). Both are on the Register of the National Estate.

Osborne House's latest role is as a Naval and Maritime Museum, near several water based activities including coastguards, boating facilities small jetties and the Rippleside ship repair yard.

South of Osborne Park there are St Helens and Rippleside parks, each with beach frontages. The nearby railway station is adjacent to a small shopping centre and a Catholic church. The Geelong North high school (1968), later a secondary college, is in neighbouring Bell Park. Geelong North encloses two small beachfront suburbs, Rippleside and Drumcondra. Rippleside has a Presbyterian church and a park. Between the church and the park the former Rippleside shipyard has been redeveloped for apartments and a boat quay. Drumcondra and Rippleside are economically distinct from Geelong North, residents having higher median incomes.

The State primary school closed in 1996.

The Geelong Golf Club (1892) at the south-west corner of Geelong North was closed in 2004 and the land disposed of in controversial circumstances. Fire engulfed the old clubhouse in 2013.

Geelong North's census populations have been: 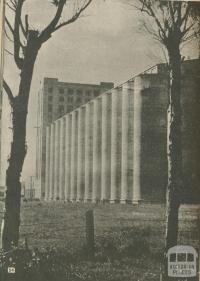