Golden Square is a suburb of Bendigo about 2 km west of the city centre. It includes the locality of Specimen Hill (see separate entry).

The Bendigo Creek and some of its tributaries flow through Golden Square, and it was in that vicinity in 1851 that gold was discovered, leading to the rushes to the Bendigo goldfields.

A village or township was surveyed in 1854, the year after a Wesleyan church was opened. Part of the Golden Square school (1875) still occupies the original site at the corner of Laurel and Panton Streets. The wealth won from the mines resulted in a fairly well-paid workforce, and several substantial civic buildings were constructed. The Methodist church (1873) and Sunday school, and the Anglican church (1881) are the most notable. There are three reserves with sports ovals, a bowls club and a pony club. The Golden Square football club entered the Bendigo Football League in 1935 and won nine premierships in the next 50 years. The local public swimming pool on Maple Street was saved from demolition and reopened as a community facility in 2013.

Golden Square was the terminus of the westerly tramline (closed 1973) and it had a railway station on the line from Melbourne to Bendigo. High Street (Calder Highway) has two hotels and a gold-discovery monument, all within sight of the two church spires.

In 1960 the Golden Square high school was opened, and it continued as a secondary college until 2008. Its campus was transferred to Kangaroo Flat. There are two State primary schools, Golden Square (333 pupils, 2014) and Specimen Hill (287 pupils, 2014).

In 2014 the Catholic church sought permission to subdivide the Bishop of Sandhurst's residence on Aspinall Street into 86 lots.

Golden Square's census populations have been: 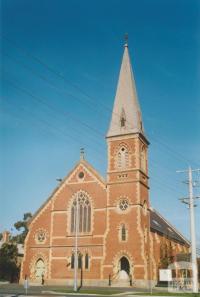 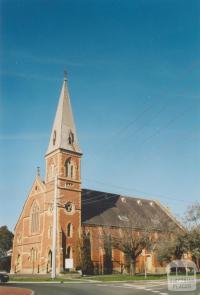