The Goulburn Valley is an expression used in describing tourism and agriculture. It is as more a locality than a geographic description of the valley formed by the Goulburn River and its tributaries.

The Goulburn River is shaped like an S in reverse. The headwaters are a short way from the summit of the Great Dividing Range in the vicinity of Woods Point. Traversing a distance of 560 km in a north-westerly direction until it joins the Murray River about 10 km east of Echuca, the Goulburn is joined by numerous tributaries. The drainage area of the Goulburn River and tributaries is 16,191 sq km, the largest of any on the Victorian side of the Murray River. It drains 8% of the area of Victoria.

The river descends from mountainous and hilly terrain, entering a relatively narrow farm valley running from Thornton to Yea. The agriculture and tourism Goulburn Valley is usually applied to the river’s downstream area, beyond Seymour, where the river enters what is predominantly a riverine plain with farm irrigation areas.

In the 1870s the pastoral properties downstream of Seymour were subdivided for farm selection. Consisting mostly of wooded grasslands, they were cleared for dry land farming, mainly cereals, grazing and local dairying. Waterworks trusts were formed to supply water for stock and domestic use, and in 1887 the Victorian Government constructed the Goulburn Weir north of Nagambie. The weir raises the river level so that irrigation water can flow by gravity along channels. Within two years the irrigated farmlands were promoted as being the Goulburn Valley.

In 1909 a large swamp west of Murchison was made into the Waranga Basin reservoir connected to the Goulburn Weir by the Stuart Murray Canal. From the Basin, channels were constructed to take water to farmlands at Tatura and Kyabram. By 1920 irrigation was extended to Stanhope, Shepparton and Tongala. These areas comprise the heart of the fruit growing and dairying of the Goulburn Valley.

Irrigation supply was increased when several upstream tributaries were dammed between 1927 and 1955. The tributaries were the Big Jamieson and Howqua Rivers and, along with the Goulburn River, were dammed to form the Sugarloaf Reservoir. In 1955 it was enlarged approximately nine fold as the Eildon Reservoir, with a capacity of 3.4 billion cubic metres on a surface area of 140 sq km. The Eildon waters enabled a great extension of irrigation through the Waranga system to as far west as Boort, linking up with irrigation from the Campaspe-Loddon system. Channels run off the main western Waranga channel, irrigating farm areas northwards to the Murray River. An eastern irrigation channel runs from the Goulburn Weir through the Shepparton and Katandra districts.

In 1991-92 the Goulburn Valley locality had farm holdings totalling 3589 sq km, of which 2167 sq km were irrigated. Ninety percent of the irrigated area was for pasture, 3.5% was for orchards and 3% was for grain.

Dairying has increased in terms of outputs per cow, although there has been a decrease in total herd numbers and number of holdings. The increase came from perennial irrigated pastures. Orcharding has decreased: canned fruit markets have declined and some orchards have been damaged by rising water tables. Yields per tree, however, have increased. In 1992 there were 7700 ha of orchards.

In 2013 the fruit cannery, SPC Ardmona, announced drastic reductions in fruit purchases. As many of the crops were canning quality, unsuitable as table fruit, orchardists were faced with growing unsaleable fruit or borrowing to convert to new businesses.

Tourism’s primary focus in the Goulburn Valley is mainly on water based recreation, upstream from Murchison. The river and irrigation storages are attractive for fishing and boating, and Eildon has several boat harbours and house boats. Lake Nagambie, back from the Goulburn Weir, is a venue for local and national rowing regattas. 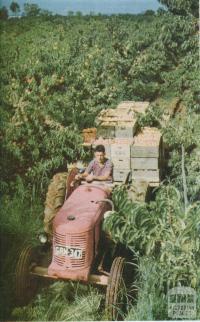 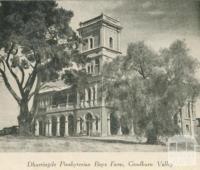