Haddon is a rural/residential village 12 km south-west of Ballarat. It is thought that it was named after an early gold prospector or after Haddon, in Derby, England.

The area was first known as Sago Hill or Campbell’s Diggings, where gold had been prospected for in 1857 but not profitably mined until 1859. Sago Hill was described in Bailliere’s Victorian gazetteer (1865) as hilly, lightly grassed, heavily timbered, and generally unfit for cultivation. Alluvial mining was undertaken within 1 km of the village, which had the Sago Hill Hotel. An Anglican school was opened in 1860.

By 1870 Sago Hill had been renamed Haddon, and it maintained a population of over 400 persons until the early 1880s. In 1883 it was connected by railway to Ballarat. Gold mining lessened towards 1900, and in 1903 Haddon was described in the Australian handbook:

During the next 70 years Haddon’s population declined to about 80 people, but its proximity to Ballarat made it suitable for rural/residential living. (The closure of the railway line in 1983 affected only freight). Haddon has a kindergarten, a primary school (233 pupils, 2014), a recreation centre, a community house, a community church and a general store. Its census populations have been: 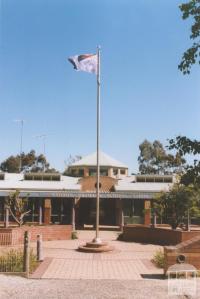