Hampton, a bayside residential suburb between Brighton and Sandringham is 14 km south-east of central Melbourne.

Hampton was associated with the popular bayside Pic-Nic Point in the early 1880s, reached from the railway terminus at Brighton. The Point, elevated with sheltering patches of ti-tree, was serviced by two hotels and coffee gardens. In 1887 the railway was extended from Brighton to Sandringham and the intervening railway station was named Retreat, after Pic-Nic Point’s Retreat Hotel. Already though, the beach and the pier were named Hampton, firstly after an early market gardener Dyas Hampton and, secondly, because incipient landboomers liked the regal sounding name, akin to the neighbouring Sandringham. The change of the station to Hampton, after representations by local councillors, confirmed the name.

Hampton was described in the 1903 Australian handbook:

Hampton’s census population in 1911 was 1369, and in 1913 a primary school was opened. It was followed by a Catholic primary school in 1924. The War Service Homes Commission built 300 homes. The 1930s saw marked growth in Hampton as market gardens were subdivided. The Victorian municipal directory, 1933 described Hampton as a seaside resort and residential suburb with three banks, a theatre, a public hall, six churches, a hotel, a Masonic lodge, a boat pier and beach dressing sheds:

Haileybury College’s second campus, just around the corner from the Hampton Street shops, opened in 1932. The shops numbered over 100 in 1933 developed as a long strip, including a picture theatre. A high school opened in 1937.

Hampton’s residential growth was pre and early post World War II. It has five sports and passive recreation reserves in its eastern area and a foreshore reserve and beach from Picnic Point to Brighton Beach. During 1971 residents showed common cause with conservationists in Black Rock when mahogany gum trees were at risk from road widening. In 1987 the high school was closed. An early public hall constructed in the late 1890s in Hampton Street, has, however, survived, after being used for worship, a cinema, a private school, dance hall and latterly for Girl Guides. Several antique shops and restaurants are in Hampton Street and shopping has not been drawn off to a free-standing drive-in centre. Hampton primary school had 649 pupils in 2014.

Hampton’s census populations have been:

Margaret Glass, Sandringham by the work of all: the history of a bayside community, Sandringham, 2009 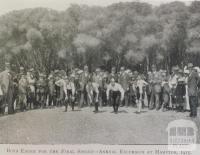