Kaniva, a rural town on the Western Highway in the northern Wimmera region, is in north-west Victoria. It is 25 km east of the South Australia border, about midway between the border and Nhill.

Although the Kaniva district was at the extremes of Victorian settlement, the district was relatively well known. It had been the location of the Tatiara pastoral run, taken up by Henry or Heighway Jones in 1845 and, more importantly, it had been traversed by the gold escort route in 1852-53 when gold was sold more profitably through Adelaide than through Melbourne. The settlements were Lawloit (1868) and Lillimur (1877). Both of these, however, were overshadowed in 1881 when James Fry and Company Limited extended its flour milling operations westwards by constructing a large mill at Budjik Hill, at a convenient convergence of tracks along which wheat was transported. There had been a steady influx of wheat farmers into the district since 1877. Fry’s mill caused a settlement to mushroom, the forerunner of Kaniva.

The name Kaniva was originally that of Lillimur. It appears that the name was transferred to the new settlement as it grew to overshadow Lillimur. The origin of the name is a little uncertain: the best explanation is that it was the name of a shepherd’s hut. Within a few years of the opening of Fry’s mill Kaniva had a post office and a Methodist church (1882), a school (1883), the Lillimur and Kaniva Courier and West Lowan Representative newspaper (1883) and the Kaniva and Lillimur Agricultural and Pastoral Society (1884).

In 1887 the railway was extended from Dimboola to Serviceton, via Kaniva. Anglican, Presbyterian and Salvation Army buildings were constructed (1889), a racing club was established (1888) and a local shire council was proclaimed on 29 May 1891, by severance of the West Riding of Lowan shire. Named Lawloit shire after the village proclaimed in 1868 at its eastern extremity, it was to retain that name until 23 May 1939, when it became Kaniva shire. A shire hall was built at Kaniva in 1894.

Between 1901 and 1911 Kaniva’s population doubled to nearly 600 people. In 1903 it was described in the Australian handbook: 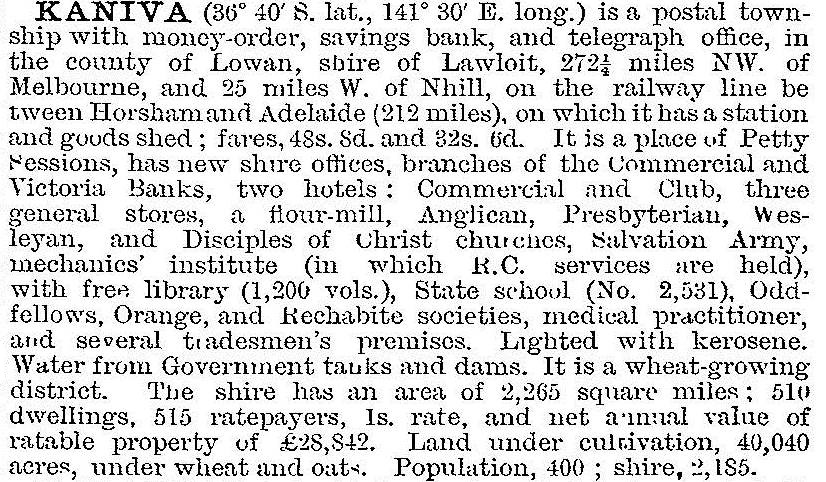 After World War I there were some soldier settlement farms in the shire and a memorial hall was built in the town. Electric power in the town was switched on in 1925, a hospital was constructed in 1928 and a new shire hall was built in 1929. During these years Kaniva featured in successive issues of metropolitan journals through the cartoons of Kaniva born artist Percy Leasen. His ‘Wiregrass’ cartoons were republished in 1986.

Decreasing volumes of the shire’s wheat was processed at the Kaniva mill from about 1900, and bagged wheat was stored at railway stations. Damage from a mouse plague in 1932 provoked the building of silos in 1939 at Serviceton, Lillimur, Kaniva and Miram. Their combined capacity was 12,850 tonnes. This figure was quadrupled by 1979, by when the conversion of land in the Big Desert (Telopea Downs) by AMP had added a large amount of agricultural land to the shire. In 1946 the shire was described in the Australian blue book: 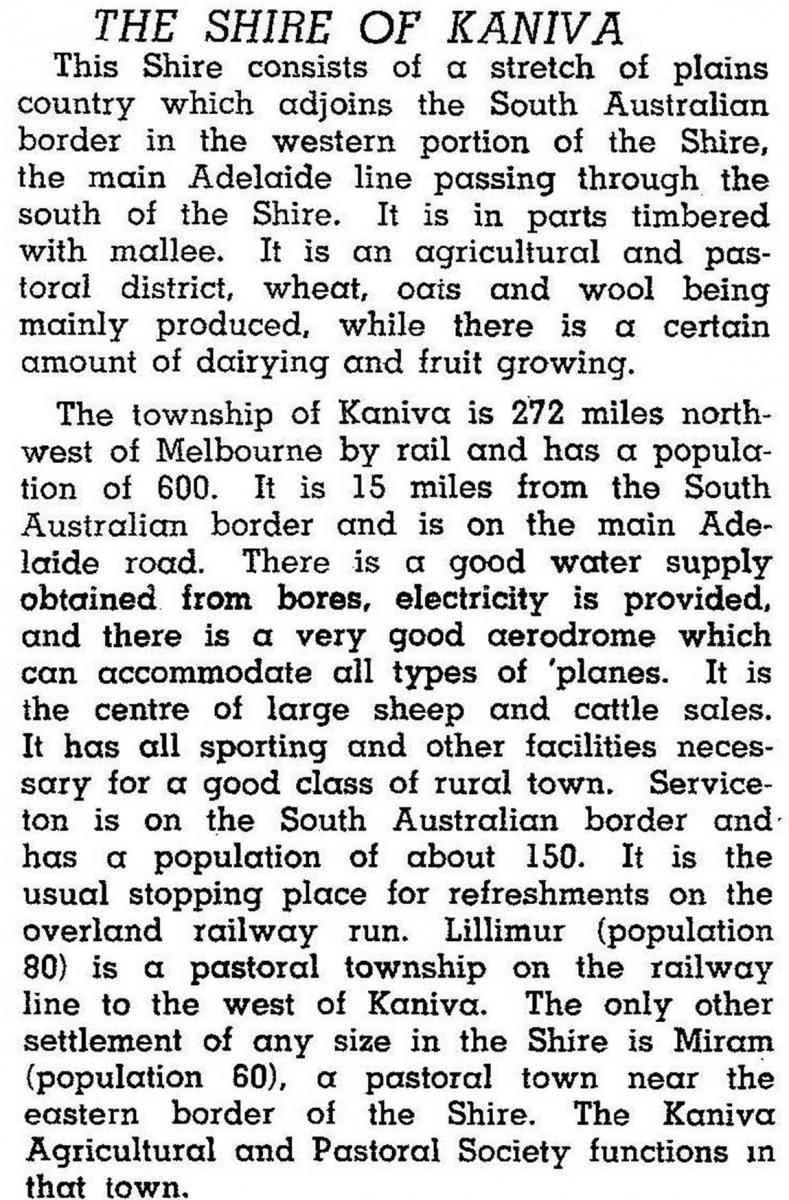 The Telopea Downs area (1335 sq km), north of Kaniva, lies in an average annual rainfall belt of 42-55 cm, and bores provide additional water. The addition of sulphate and phosphate trace elements has rectified soil deficiencies, yielding introduced pasture where native shrub and heath previously grew. Clearing was done by heavy anchor chain, drawn by caterpillar tractors, and burning. Clearing and settlement occurred during 1953-74. The idea was taken up by the Victorian Minister for Lands in 1967 for the Little Desert’s western sector. Conservationists and agricultural economists opposed it: the project was marginal at best. The conservation movement, the metropolitan media and the parliamentary upper house defeated the proposal, and the minister lost his rural seat at the next election. The event has been celebrated as the conservation movement’s first significant victory in Australia.

The shire had prospered with the addition of about 82 farms at Telopea Downs and the proclamation of the Little and Big Desert National Parks has brought some tourist income into the district. The Parks’ areas are 1320 and 1423 sq km respectively.

Kaniva town’s population numbered around 800-950 during the 1960s-80s, but has declined since then. (Declines have been more pronounced in nearby smaller towns and villages). Kaniva has a secondary college (1963), a consolidated primary school (1953), formed after the closure of several smaller surrounding schools, six churches, a hospital and a civic centre (1969). Kaniva college had 208 pupils in 2014. There are several sporting clubs, a golf course, a swimming pool (1958), four public reserves and a sports complex. In addition to the shopping centre there are two hotels, two motels, a caravan park, an historical museum and a showground. The railway station (1887) is on the Victorian Heritage Register. Of the several newspapers published in the district since the 1880s, the Kaniva Times continues.

Graincorp flagged the closure of its grain silo at Kaniva, affecting local farmers. A new industrial estate near the waste transfer site was constructed in 2014.

Kaniva shire had an area of 3082 sq km at the time of its amalgamation with most of Kowree and parts of Arapiles and Glenelg shires. They were united to form West Wimmera Shire on 20 January 1995. In 1994 farming occupied 66% of the shire’s area, on which 317,000 sheep and lambs were run and from which 67,560 tonnes of wheat and 48,210 tonnes of barley were harvested.

The Kaniva district’s early religious affiliations were reflected in 27.2% of its population being associated with the Uniting church at the 2011 census (Australia, 5.0%). Farming accounted for 30% of employment in the district (2011 census).

J. Edward Robertson, The progress of Nhill and district introducing Kaniva of today, the author, c1912