Kensington has a substantial low-lying alluvial area on which the abattoirs was built. To the east was Seagull Swamp, now J.J. Holland Park. North of the low-lying area is a basaltic layer, defined by an escarpment at the back of the abattoirs and skirting the swamp to Browns Hill at Lloyd and Radcliffe Streets. Healy's Point Hotel below Browns Hill has frequently had its cellar filled with flood water.

On 30 August 1856, a Crown grant was made to the Melbourne City Council for cattle saleyards on the south side of Racecourse Road, Newmarket, and the abattoirs adjoining the saleyard to the south-west. Its most south-westerly boundary conveniently adjoined the Maribyrnong River for the discharge of liquid waste. The buildings were primitive and unhygienic and were replaced by better facilities between 1898 and 1908. Nearby, on the river bank, there were factories for boiling-down, fellmongery, bone manure and glue.

The cattle saleyards opened in 1859, the year before a railway line from North Melbourne to Essendon began operation, with stations at Kensington and Newmarket. Although sheep and cattle were driven to the stockyard on the hoof (and used residential streets as stock routes until the 1950s), the Newmarket railway siding also became active during night hours for holding and delivering stock.

In the mid-1870s Kensington included a small area named Balmoral. Future subdivisions yielded street names with a similar regal flavour, somewhat ironical given the proximity of the proletarian slaughter yards. In addition to the riverside industries there were three tanners, a candlemaker and a chapel with a school. By then moves were made for a State primary school, and the site in McCracken Street was found and the school opened in 1881. Commercial and residential development clustered around Racecourse Road and down beside the railway line. McConnell Street, McCracken Street and Rankins Road had several shops, but Macaulay Road had only Hardimans Hotel and three shops. The school precinct had Wesleyan and Anglican churches, and later gained the borough hall.

Flemington and Kensington borough was formed by severance from Essendon and Flemington borough on 17 March 1882. The borough hall was opened in Bellair Street in 1902, four years before the borough was amalgamated with Melbourne City Council. The Council had run the saleyards and abattoirs for several years. Kensington was described in the 1903 Australian handbook:

Between 1881 and 1890 the State school's enrolment increased from 230 to 700 pupils, and to over 1000 before the turn of the century. Overcrowding, classes in shelter sheds or pavilions with canvas enclosures, annexes in church halls and the town hall persisted until the 1920s. The peak enrolment was 1241 in 1913. It had some notable ex-pupils, including Dr E. Morris Miller and Hal Porter, who lived in a cottage in Bellair Street with smaller dimensions than described in his Watcher on the cast iron balcony.

In 1930 the Victorian municipal directory described Kensington as:

The abattoirs and saleyards dominated Kensington's life. Newmarket saleyards became a national barometer for stock prices, growing in throughput for export sales after 1904. The peak throughput for sheep and lambs was 6.45 million head in 1944, and the daily record was nearly 146,000 head in 1953.

The swamp areas were virtually untouched until the Army established an ordnance depot at the back of the abattoirs in 1941. Twenty years later the Housing Commission began filling the margin of the Seagull Swamp with high-rise flats at Altona Street. By then upstream flood mitigation works and pumping stations had lessened the risk of inundation. Known as the Macaulay pumping stations, they are near the Macaulay railway station.

Marauding stock in old Kensington were effectively stopped when a stockbridge from the Newmarket railway siding was built in 1964. Within 20 years, however, there was general agreement that time was up for the saleyards and abattoirs, and the State Government began planning the Lynch's Bridge project, replacing the stock facilities with housing and open space. (Lynch's Bridge marked an early crossing place over the Maribyrnong River, joining Kensington to Ballarat Road, Footscray.) The project extended to Footscray where the Angliss Meatworks site had similar medium-density housing put on it.

Kensington's Lynch's Bridge development marked the first time that open space was sensibly provided, apart from Holland Park. The Macaulay shopping area had been a struggling precinct for generations, and a Council report in 1987 predicted possible further decline from loss of jobs at the saleyards and abattoirs along with the general decline in manufacturing. Medium-density housing and gentrification of the cottages seem to have proved to be its salvation, although not without much-troubled traffic mitigation works to get heavy trucks out of Macaulay Road.

The Holy Rosary Catholic church and school continue to be notable landmarks in Kensington. The dominant red-brick church looking down Macaulay Road was disposed of by the Anglican church to the Coptic Orthodox church. It forms part of an interesting precinct consisting of the State school (444 pupils, 2014), a former Methodist church and Sunday School hall and an old Anglican parish hall. Kensington Community High School (1975) has found a site in the Lynch's Bridge housing area (163 pupils, 2014).

Kensington's census population and census figures for Flemington and Kensington have been:

*Calculated by Moonee Valley City council, which had Flemington and Kensington within its boundaries following the re-absorption of the district by Essendon city on 1 November 1993.

Keith Vincent, On the fall of the hammer: a personal history of the Newmarket Saleyards, State Library of Victoria, 1992 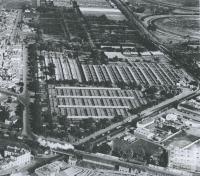 Cattle being driven through a residential area near Newmarket, 1953

Cattle being sold at Newmarket Saleyards, 1953 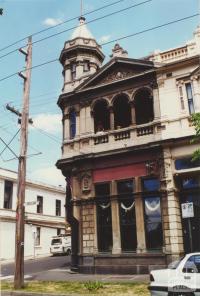