Kerang Shire (1898-1995) was originally part of Swan Hill shire, which was established in 1872, stretching from the South Australian border to Cohuna. Kerang was the shire’s administrative centre. Between 1885 and 1893 the shire was subdivided and three more shires were formed – Gordon (1885), Mildura (1890) and Castle Donnington (1893).

Kerang shire extended eastwards from the Lalbert Creek and included Cohuna until 1922, when Cohuna shire was formed by severance.

In 1863 a private irrigation scheme was begun in the Kerang district, probably the first such project in Victoria. After the passing of the Water Conservation Act (1885) irrigation trusts were formed in the districts of Cohuna, Koondrook, Murrabit and Tragowel Plains, all in or extending beyond the shire. After the trusts were united under the State Rivers and Water Supply Commission (1906), water supply for stock and irrigation came from the Waranga Western Channel and the Torrumbarry Weir on the Murray River (1923-24). The Torrumbarry system supplies the eastern sector of the former shire and the Waranga channel supplies the western sector around Quambatook. Stock water also comes from the Grampians storages via the Charlton-Wycheproof channel.

In the 1880s the township of Budgerum, 8 km north-west of Quambatook, thrived until the railway line was extended through Quambatook. A local school operated in Budgerum between 1881-97, briefly reopening in 1908-09. The Budgerum cemetery was in use between 1883-1904 before the opening of the Quambatook cemetery.

Kerang shire and several of its important towns were described in the Australian blue book in 1946:

During the first 20 postwar years the shire’s population steadily increased although not as rapidly as in the 1920s. The Kerang township’s population grew by 37%. In 1966 it was severed from the shire and made a borough.

Kerang shire was traversed by the Murray Valley Highway and railway lines to Robinvale and Swan Hill. East of the Avoca River the several lakes (some ephemeral) attract bird life and recreational activity. (Kerang is known as the Gateway to the Northern Waters). The tendency for water to accumulate has, combined with irrigation, caused salting of some farmlands, but regrading of paddocks has aided the dispersal of water and lowering of water tables.

On 20 January 1995, most of Kerang shire was united with most of Cohuna shire and Kerang borough to form Gannawarra shire. Kerang shire’s census populations were: 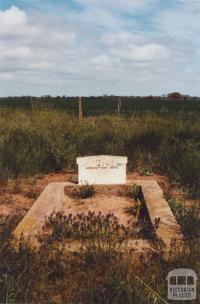