In the late 1850s summer grazing land was needed for beef production, and the swamp and its margins were good for that purpose. George Keys, who had farmed in the area since about 1844, and two of his sons bought allotments in the area, and by 1859 land north of the Carrum Swamp was known as Keysborough. The Keys family helped to open a Wesleyan church there in 1861. A State primary school was opened in 1869. Keysborough was described in the 1903 Australian handbook:

The southern part of Keysborough shares the former Carrum Swamp with Bangholme. As the swamp was drained between 1878 and the 1920s farms were created, and many of the owners belonged to only a few families, creating a close knit community. In 1927 Keysborough was described as occupying 2 sq miles with 36 farms, engaged in dairying, pastoral and agricultural pursuits. The farming community continued relatively unchanged, running patriotic entertainments during World War II. Market gardens grew wartime vegetables for a cannery at neighbouring Dingley.

Shortly after the war, a public hall and reserve were established in Cheltenham Road, fulfilling a long cherished wish for a community meeting place in addition to the church and school, which were further south and isolated.

The centenary of Methodist services in the district was commemorated in 1953, with nearly 50 Keys descendants attending. The rural gentry added a bowling club in 1961, but soon some farm holdings were subdivided. Market gardens were not so profitable on the sandy soil as transport to Melbourne became cheaper. Soon afterwards Haileybury College, Hampton, established a second campus in anticipation of its coming school catchment area.

In 1973 there were about 250 families and other addresses in Keysborough and the suburbanisation of Keysborough north occurred during the late 1970s and 1980s.

The Parkmore drive in shopping centre (1973) is in Cheltenham Road and had grown to sub-regional status by the 1990s. There are several parks and reserves, including the Roth Hetherington Australian flora reserve, and the Keysborough Golf Club borders the remaining farm areas in the south. The golf club began in 1899 in Albert Park and transferred to Keysborough in 1952, with facilities limited to a Nissen hut club house and a fibro cement dining room set among snaky wild grass.

The golf club’s neighbours were the rural primary school, the CFA station and the Methodist church. In the 1980s to 1990s, residential housing was built north and east of the golf course, along with some multicultural entrants such as the Turkish community’s Isik College, the Serbian Orthodox church, a Serbian sports centre and Vietnamese, Sikh and Sri Lankan places of worship. All these draw from catchments in Dandenong South and Noble Park. Lastly, the Methodist church was acquired by a Samoan congregation.

Keysborough has no railway service but buses take residents to Springvale and Noble Park stations. An arterial road through Keysborough takes traffic from Westall Road, Springvale South, to the South Gippsland Highway.

Keysborough’s census populations have been:

At the 2011 census Vietnamese and Khmer language groups were 13.5% and 7.6% respectively of the population.

G.M. Hibbins, A history of the City of Springvale:constellation of communities, Port Melbourne, 1984 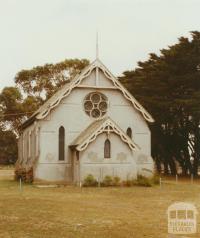