Korumburra Shire (1922-94), west Gippsland, was in hilly country south of the Princes Highway. Its administrative centre, Korumburra, is on the South Gippsland Highway, 110 km south-east of Melbourne.

Korumburra shire began as the Poowong and Jeetho shire on 29 May 1891 (see separate entry), and adopted the name of its main town on 25 October 1922. The shire offices had been at Korumburra since 1908.

The creation of the shire coincided with the extension of the Great Southern Railway (Gippsland): Tooradin to Loch (1890); Loch to Korumburra (1891) and Korumburra to Leongatha (1892). The railway extensions also coincided with the opening up of dairy farms and favourable reports of coal deposits south of Korumburra. The coal was important for both rail locomotives and for town gas. Mines opened were: Coal Creek, Korumburra (1892), Jumbunna (1894) and Outtrim (1896). A railway branch from Korumburra was completed in 1894 (Jumbunna) and extended in 1896 (Outtrim).

The shire got off to a flying start. It began with 390 sq km, acquired part of Woorayl shire (Leongatha) in 1893 and the area around Kongwak in 1898, giving it 570 sq km. Its population was 7900 in 1901, a figure not exceeded until 90 years later. Early population losses are explained by the decline of the coal towns and the failure of small farms. 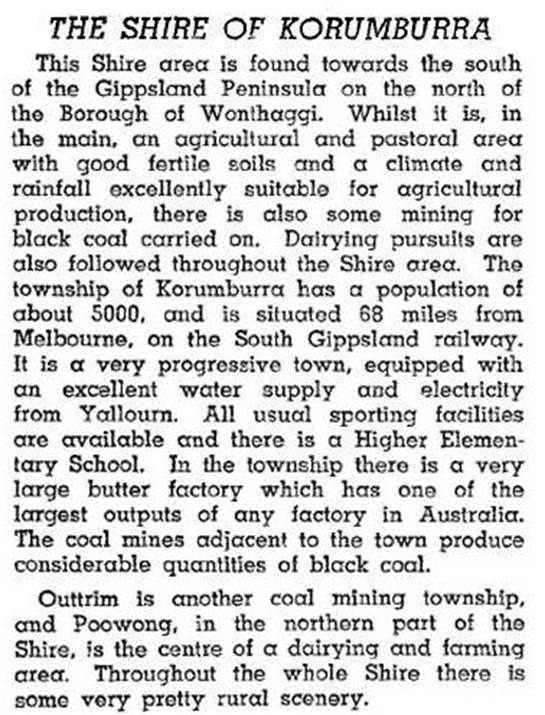 Korumburra’s chamber of commerce began a campaign in 1949 to bring new industry to the town, and the process continued in fits and starts for several decades. The notable population upsurge appears to have been from new housing on the outskirts of Korumburra. (In 2006 urban Korumburra had 3146 people and its environs another 1320.)

Dairy farming continued to be the leading rural activity, but all the produce was processed outside the shire after 1975 when Korumburra’s factory closed. Closure was keenly felt, just as was municipal amalgamation in 1994: Leongatha had come out in front in both contests.

Joseph White, The history of the Shire of Korumburra, 1988

A typical scene near Korumburra