Lalbert is a rural village and district in north-western Victoria, about 40 km south-west of Swan Hill. It is on the railway line between Bendigo and Robinvale.

Lalbert was named after the Lalbert pastoral run, taken up in 1846 by Thomas and Jabez Ham, two of four sons of the Reverend John Ham, the first minister of the Baptist Church in Collins Street, Melbourne. The Ham brothers’ interests were mainly in Melbourne, but their family home in Orrong Road, Armadale (Melbourne suburb) was named Lalbert. The name is thought to have been derived from an Aboriginal expression, Laal-bit, meaning a parasitic creeper growing on a mallee eucalypt, or the knobby fruit of the creeper.

The Lalbert swamp, or Lake Lalbert, west of the village is the receptacle of the Lalbert Creek. It is intermittently dry, but floods the surrounding plain during wet seasons.

Closer settlement of the Lalbert district occurred later than near Kerang, it is being less well watered and more distant from a railway line. A school was opened in 1890 and a hotel in 1892. Surveyed township lots were first sold in October 1893. Efforts began about then for the railway to be extended from Quambatook, but the extension did not come until 1900. During the first decade of the new century, a public hall and a Catholic church were opened, and other denominations began holding services. The Presbyterian and Anglican churches were built in 1915 and 1919.

Lalbert is a wheat-sheep farming district. Water for stock is supplied by channel from Lake Lonsdale and other Grampians storages. Silos were built at the Lalbert railway station in 1942 and further storage facilities were added in 1965 and 1969.

Lalbert has a golf course, a recreation reserve, a public hall, two churches, a general store, a hotel and a school (10 pupils, 1998, 4 pupils 2013). Lake Lalbert is a game reserve, and the Wangie Faural Reserve is 7 km west of Lalbert.

By 2014, with changes in agriculture, came a general decline in the town's facilities including closure of the silo, hotel, primary school and many shops.

Lalbert’s census populations have been: 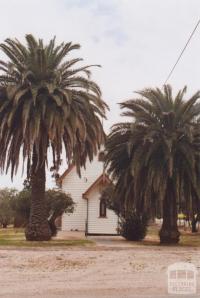 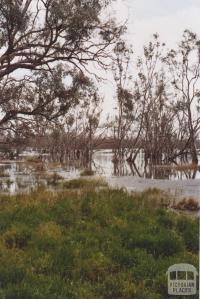