Learmonth is a rural township on the Sunraysia Highway, 20 km north-west of Ballarat and adjoining the northern shore of Lake Learmonth. It was named after the Learmonth brothers, proprietors of the Burrumbeet pastoral run (1838) and the Ercildoune estate. Learmonth township was surveyed in 1859 and was one of three towns for which land was excised from the Burrumbeet run.

The Learmonths gained an enviable reputation as merino wool growers and stud owners at Ercildoune, until they sold up in 1872.

When Learmonth was surveyed there were already Presbyterian, Catholic and Wesleyan churches (1857), and the Stag Hotel (1854). A school (1859) was conducted by the Presbyterian church until 1873, whereupon it became a government school. A rough-hewn granite Anglican church was built in 1861, a court house was opened in 1864 and a temperance hall, later mechanics' institute, was built in 1867. By the mid-1860s there were five more hotels, several stores, including bakeries, saddlers and blacksmiths, and four churches. The offices for Ballarat shire were built in Learmonth in 1866.

Apart from the closure of a couple of hotels, Learmonth maintained and added to its amenities and institutions by 1900. In 1903 it was described in the Australian handbook:

Learmonth's census population in 1911 was nearly 600 people. In 1933 the census was under 350, which may suggest a reason for closure of the court house in 1913. The shire offices continued until 1964 when a new building was opened in the shire's burgeoning urban areas at Wendouree adjoining Ballarat.

Lake Learmonth is surrounded by volcanic hills on its northern, western and southern sides. The lake has angling and boating facilities, shoreline reserves and a caravan park. Learmonth has a hotel, a motel, two halls, three churches, a recreation reserve, tennis and bowling facilities, a general store and a school (10 pupils, 2010) which closed in 2012 pending a new strategy to attract enrolment. Historic buildings include the former shire offices (Register of the National Estate) and the 'Laurels' homestead, also the site of a flour mill (1858-c1900).

In 2005-06 the Learmonth Environmental Action Group successfully fought plans for a proposed 170 hectare saleyards and abattoir complex on the edge of the town.

Learmonth's census populations have been:

James H. Mitchell, Progress in the Shire of Ballarat, the shire, c1972 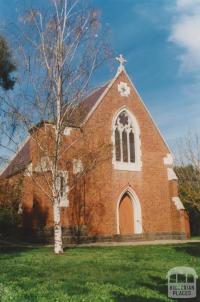