The township of Lindenow is located on the edge of the extensive Mitchell River flats, 17 km west of Bairnsdale in East Gippsland.

The area was part of the territory of the Brabralung tribe but in 1842 was appropriated by the Lindenow pastoral run, which was probably named after a place in India. In the 1860s, some properties were selected and the district was known as Coongulmerang, the parish name, or Lindenow Flat. Sheep and cattle were grazed on the lightly timbered hills and as the marshy heavily timbered flats were cleared, crops of wheat, oats and barley were grown. A hotel, store and post office were operating by 1870 when a school commenced. A mechanics' institute hall was constructed in 1882. In the 1880s subdivision of land for township lots and small farms led to rapid development of the area. Settlers began dairying, and there were soon two creameries in operation and later a cheese factory.

The railway line was extended to Bairnsdale in 1888. It passed several kilometres to the south of Lindenow township and a station named Lindenow was established. Farm produce was railed to market as well as railway sleepers, paving blocks, fencing and building timber from numerous sawmills in the district. A small township grew up around the railway station, eventually being known as Lindenow South. Sawmills were established near the station and a flax mill operated for a few years in the 1940s. From 1950 to 1977, the mill building housed a factory manufacturing axe and broom handles, cupboards and window and door frames. Although the railway station closed in 1982, Lindenow South has experienced some residential development in recent years.

Irrigation from the Mitchell River was discussed from the 1880s. A weir was constructed further upstream, near Glenaladale, but the project was abandoned in 1893 because of excessive cost.

During the 1890s economic depression, two village settlements were established in the area. Grain crops were still grown but maize became increasingly widespread. Dairying with associated pig raising was popular, and large numbers of horses were bred for the Indian remount trade. By 1903, the Australian handbook described an established township serving a settled agricultural district:

Some vegetables were produced from the 1920s, and throughout the 1930s the Lindenow district was the main source of supply for the sugar beet factory at Maffra. During the 1950s large amounts of wattle bark were stripped in the district.

After the war, dairying replaced maize growing as the main pursuit on the fertile river flats. Milk was transported by bulk tanker to Bairnsdale or Maffra.

But by the 1960s the growing of vegetables became more profitable than dairying. A wide variety of vegetables are grown, much of the crop supplying fresh markets. A large vegetable processing plant operated at Bairnsdale from 1985 to 1992, while some produce is processed by local vegetable packing businesses. Flood irrigation of the river flats was first used in 1927, and spray irrigation was introduced in the 1940s. A dam was again proposed for the Mitchell River and some preparations made in the late 1970s, but again did not proceed. Flooding is a regular occurrence on the Mitchell River, with significant floods in 1870, 1891, 1894, 1936 and 1990.

Lindenow South has a general store, a primary school (28 pupils, 2014), a community hall (1969) which replaced the mechanics' institute (1888-1984), a golf course and a recreation reserve. The old post office was installed at the reserve as a gatekeeper's shed.

J. Richardson, History of Lindenow and district: the grand old pioneers, their descendants and others, 1991 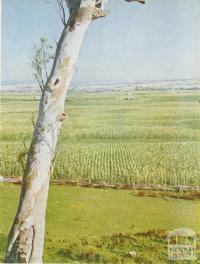 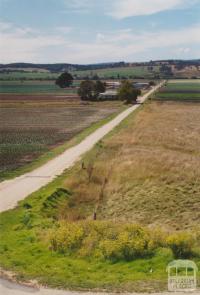 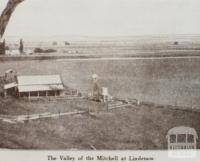 Valley of the Mitchell at Lindenow, 1925