The Mallee region in north-west Victoria is characterised by the Mallee/sandy-loam soils and species of Eucalyptus which grow as multiple saplings from a large root or lignotuber. The Mallee eucalypts, however, extend southwards and eastwards, and extensive stands are harvested for oil in the Bendigo region. It is thought that the name Mallee was derived from an Aboriginal word describing the scrub or thickets.

Kerang and the Loddon River are the usually accepted eastern boundary of the Mallee. The southern boundary is usually a line extending through Lake Hindmarsh to the South Australian border, placing Birchip, Beulah and Rainbow in the Mallee. Some parts of the region are heathlands, grasslands and native-pine areas. Nearly all of the area has average annual rainfalls of 380 mm (15 inches) or less, and much higher rates of evaporation. Apart from the Murray River, streams flowing into the Mallee empty into lakes, some of which are ephemeral, or into porous sands.

Despite the heat and low rainfall, pastoral activity reached the Mallee in 1846 and occupied about two-thirds of it by 1859. The first pastoral runs were along the Murray River, along the Wimmera River terminating at Pine Plains just beyond Lake Albacutya and along Yarriambiack Creek to Lake Corrong. The last two water courses have their headwaters in the Grampians, in the southern Wimmera, which later suggested a means of artificial water channels fed from Grampians storages. On the eastern extreme of the Mallee there were also early pastoral runs along the Tyrrell and Lalbert Creeks, which also emptied into lakes.

Early township settlements in the Mallee were Swan Hill (near Tyntynder pastoral run and accessible by river boat) and Hopetoun, founded by Edward Lascelles, after whom Lascelles is named.

Before Lascelles came to the Mallee, the pastoral leaseholds underwent serious decline from rabbit invasion. As pastoralists retreated the rabbits advanced faster. In 1875 the Mallee pastoral lands had 420,000 sheep, and eight years later the number of sheep had fallen by four-fifths and the number of pastoral runs by 62. Lascelles undertook rabbit and vermin eradication and the construction of rabbit-proof fencing, encouraging the prospect of settlement in the Mallee. Several authorities remarked on the potential fertility of Mallee soils. In the late 1880s Lascelles subdivided his Lake Corrong run for wheat farms.

Railways advanced towards and through the Mallee, putting wheat crops within reach of markets: Wycheproof – Sea Lake (1895), Birchip-Woomelang (1899), Warracknabeal – Hopetoun (1894) and Jeparit – Rainbow (1899). The Mildura irrigation colony (1887) began the Mallee’s largest population centre, and the railway line was extended to it from Woomelang in 1903. The second wave of clearing and settlement came with post World War I soldier settlement, westwards into the Murrayville district, the Millewa settlement and south of Mildura at Red Cliffs.

Many settlements and railway extensions ran in tandem with an active State Rivers and Water Supply Commission, which built Grampians water storages and supply channels. The Millewa settlement was supplied with water from the Murray River, and the Murrayville area, west of Underbool, had bore water. East of Underbool the Grampians system is topped up from the Western Waranga Channel system. Both systems rank among the world’s longest water supplies for stock and domestic use.

Clearing the land of Mallee scrub was arduous, although much cheaper than the heavily forested country of Gippsland which was converted to dairying. A heavy roller flattened the scrub which was burnt after drying. A good burn removed much of the live material left in the ground, but a cool burn left it to resprout and compete with wheat crops. The stump-jump plough made the ground tillable. Mallee roots were gradually taken out, providing domestic firewood and a source of funds when sold. They were slow burning and gave good heat. Excessive cultivation led to wind erosion, and a sensible protective routine was fallow/grazing, wheat and oats over three years.

The Merbein – Mildura – Red Cliffs irrigation area produces grapes for drying, wine and table use, citrus and other fruits, vegetables and stock fodder. The area’s population has grown steadily since the 1930s, and during 1976-96 Mildura city’s grew by 40%. Tourism has been a contributing factor. This area of growth caused the population figures for the Mallee region to grow by one-sixth between 1976 and 1996, masking the declines in the farmlands where consolidations have occurred to make more productive units. In 1976 Birchip and Wycheproof shires had 5716 people and 20 years later their areas had 3846 people. The Swan Hill area’s population has remained stable, as tourism has compensated for population loss in the primary production area.

The extreme north-west of the Mallee was the site of the unbuilt Chowilla dam (1960s-70s). Proposed by the South Australian government, the dam would have inundated 117 sq km in that State, 427 sq km in Victoria and 505 sq km in New South Wales. Shallowness and high evaporation were among the reasons for the dam not proceeding. Instead, the Dartmouth storage, on the Mitta Mitta River, south of the Hume reservoir was built. South Australia gained increased water by releases into the Murray River.

There remain large Mallee areas which have been kept as reserves and National Parks. The first was Wyperfeld (1909), north-west of Lake Hindmarsh and Rainbow. Adjoining it is the Big Desert Wilderness Park, extending to South Australia. Northwards, on the far side of the Murrayville-Underbool farmlands, there are the Murray-Sunset National Park and the Pink Lakes State Park. The Hattah-Kulkyne National Park adjoins the Murray River south of Mildura, and there are scattered public lands west of Mildura along the river. Public lands comprise about a third of the Mallee’s 430,000 sq km.

In addition to towns already mentioned, other population centres in the Mallee include: Lake Boga, Manangatang, Ouyen, Quambatook and Walpeup.

The census populations of the Mallee have been:

These figures are based on local-government boundaries which did not exactly correspond with the Mallee’s southern boundary, but population in that area has been relatively thin. The part of the former Kerang shire west of the Loddon River is also omitted.

Census data since 1996 does not correspond with the area covered by the table.

A.S. Kenyon, ‘The story of the Mallee’, The Victorian Historical Magazine, The Historical Society of Victoria, September 1914-March 1915. 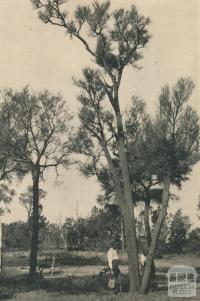 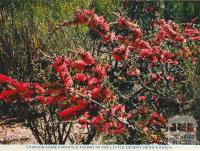