The township of Meeniyan, on the South Gippsland Highway, lies in the valley of the Tarwin River, 143 km south-east of Melbourne.

Land was selected in the area from the late 1870s. When the route for the railway from Melbourne into South Gippsland was surveyed, it passed close to the fledgling settlement of Meeniyan. According to Bunce's Language of the Aborigines of the Colony of Victoria (1859), Meeniyan is an Aboriginal word meaning moon. When the township was surveyed in 1890, many businesses, established to cater for the railway construction camps, had to move location. A village settlement was also laid out near the town.

By the time the railway line opened in 1892, Meeniyan was a thriving township with general stores, butchers, baker, blacksmiths and saddlers. A mechanics’ institute hall was constructed in 1892 and a school commenced the next year. The first saleyards were built in 1896.

The town progressed, acquiring a police station, banks and an infant welfare centre. A bush nursing centre served the district from 1912 to 1935. A new hotel was built in 1933, after the original building was destroyed by fire. Meeniyan became an important stock selling centre, being central to a large dairy farming district. Pig sales were held from 1922 until the 1950s. A bacon curing factory was established in 1904.

The racing club, founded in 1896, held its last meeting in 1955, as Stony Creek, nearby, had developed a strong racing club and improved racecourse.

Meeniyan is situated close to the junction of the east and west branches of the Tarwin River and has suffered from floods over the years. Possibly the worst flood was in 1934 when the town was isolated. Improvements to the river and drainage of low lying land have mitigated flooding.

With improved roads and transport from the 1950s Meeniyan was overshadowed by the large provincial town of Leongatha. Meeniyan’s saleyards closed when a large selling complex opened at Koonwarra, near Leongatha, in 1982. However, the town has been rejuvenated in recent years, capitalising on the considerable tourist traffic which passes on the South Gippsland Highway. Old fashioned shops offer souvenirs and crafts, teas and meals. There is a hotel, a motel and caravan park accommodation. Craftspeople and city dwellers have been attracted to the country lifestyle on small blocks of land. The town serves as the social and sporting centre for the surrounding farming district, with a number of sporting clubs, a bowls club, a golf course and sports stadium. Its primary school (Tarwin Valley) had 103 pupils in 2014. Of the four churches once in Meeniyan, the Catholic church has continued.

The railway closed in 1992 and has been replaced with a recreational rail trail.

Census populations for Meeniyan have been:

At the 2011 census dairy farming accounted for 11.3% of employment in Meeniyan and environs, and other farming 5.5%. 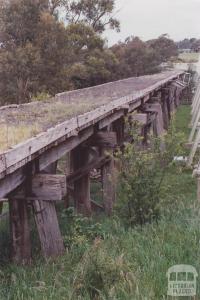 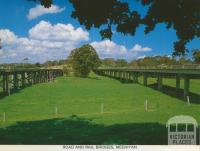