Mernda, on the edge of metropolitan Melbourne, is 26 km to the north of the central city area. Originally known as Morang until 1893, then South Yan Yean, the name Mernda was given in 1913 to distinguish the locality from the Yan Yean reservoir and picnic grounds. The name Mernda is derived from an Aboriginal word thought to mean earth.

When Mernda was named in 1913 it had a school, a Catholic church (1888), a Methodist church (1888), a store, a railway station and a mechanics' institute (1888). The institute was used for the Whittlesea shire council's chambers until the 1920s. Mernda had several dairy farms for metropolitan milk supply. A live stock sale yards operated beside the Bridge Inn, which had been built in 1850 and enlarged in 1891.

Mernda’s eastern boundary is the Plenty River, and at a point south of Bridge Inn Road the Yan Yean pipe track is raised on a flume over the river. The flume (1857) is heritage listed. There is also a north-south railway corridor, left over from the Epping-Whittlesea railway (1889-1959). Mernda’s old shopping area adjoins the former railway station, where there are a general store, a revamped bakery (1870s), the Methodist (Uniting) church and hall (1940) and the recreation reserve. Not far away was the school, closed in 2011 and replaced with a new campus in a housing estate west of Plenty Road. Mernda primary school had 733 pupils in 2014.

The estate, marketed as Mernda Village, has linear parks, a community centre and a Catholic primary school. Housing continues southwards, around the Bridge Inn Hotel, the nearby livestock saleyard site (1888-2003) and the Mayfield Presbyterian church on Plenty Road. There is provision for a P-12 school. In 2010 the Uniting church P-12 Acacia College was opened, further west along Bridge Inn Road. It was closed in 2012 and was acquired by Adventist Schools Victoria, re-opening in 2013. Suburban Mernda continued as a work in progress. Its census populations have been: 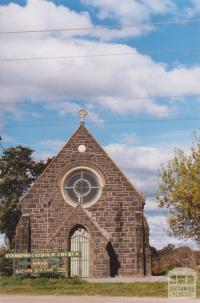