Merrigum is a rural township in the west Goulburn Valley irrigation area in northern Victoria. It is midway on the railway line between Kyabram and Tatura. The name is thought to be derived from an Aboriginal word meaning little plain. The Merrigum pastoral run was first occupied in 1859.

The Merrigum district was first so named in about 1875 coinciding with the subdivision of pastoral runs for farm selections. A school was opened in a Methodist chapel in 1877. In 1886-87 when the railway line was built, a Railway Hotel was opened near where the station and the township were established. A mechanics’ institute was opened in 1888 and a butter factory in 1895.

Merrigum developed a wider than usual range of social and cultural activities: there were a mutual improvement society and a reading circle (c1902), a progress association, a brass band, a horticultural society and a debating club, as well as football, cricket, tennis and gun clubs. The work of the progress association is evident in the many shade trees in the township. In 1903 the Australian handbook described Merrigum:

Merrigum is part of the orchard heartland of west Goulburn Valley. Its irrigated farms also have good dairy production. The butter factory was taken over by Carnation Milk (USA) in 1949. A swimming pool was opened in 1951 and much enlarged public meeting facilities were provided when the memorial hall was opened in 1959.

Merrigum has a golf course, a recreation reserve, an oval, five horse training tracks in the district, Catholic, Anglican and Uniting churches, a school (39 pupils, 2014), tennis and bowling clubs, along with the hotel, hall and swimming pool. The milk factory has ceased operation.

Merrigum census populations have been:

In 2011 employment in Merrigum and environs included dairy farming (11.6% of all employment), orcharding (7.6%) and fruit and vegetable processing (4.3%).

W.H. Bossence, Tatura and the Shire of Rodney, Hawthorn, 1969 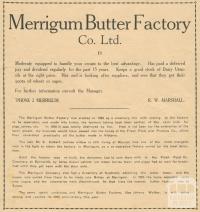