Mill Park is a residential suburb 18 km north-east of central Melbourne, immediately north of the former Janefield Training Centre, Bundoora. Its western and eastern boundaries are the Darebin Creek and the Plenty River respectively.

The area is named after the Mill Park property owned by Henry ‘Money’ Miller (1809-88). He bred racehorses and conducted a range of dairy and grazing activities, sufficient to occupy 65 persons housed in a village on the property. The Findon Hounds and the Findon Harriers Hunt Club (a name connected with Miller's residence Findon, in Kew) were at Mill Park.

The Mill Park property specialised in horse breeding into the next century and the Findon Harriers continued there until 1930. Mill Park's rural landscape was largely unaltered until the 1960s, apart from the opening of a quarry in 1964. Following on from residential development in Bundoora, subdivisions occurred in the 1970s and a kindergarten, pre-school centre and shopping complex were built by the end of the decade.

The shopping centre has several historic place names: The ‘Stables Shopping Centre’ and Redleap Avenue commemorate the solidly built Redleap racing stables on the Miller property and the Plough Hotel commemorates the Plough Inn which formed a nucleus village in the Mill Park area during the 1850s. Another historic building is the Janefield Presbyterian church (1861) in Plenty Road, latterly a Macedonian Orthodox church.

During the 1980s Mill Park underwent rapid residential development, with State (1980) and Catholic primary schools, a State secondary college (1992) and recreational facilities. The RMIT Bundoora East Campus is inside Mill Park's southern border, and the Bundoora West campus just outside. All of the subdivisions are configured to reduce through traffic in residential areas. There are several neighbourhood reserves, and three large ones in the west of Mill Park. A freeway reservation runs north-south, parallel to Darebin Creek. The east of Mill Park extends to pollution control wetlands which border the Plenty River. The extreme north boundary is the re-opened railway from Epping to South Morang (2012). In 2013 juice plant operator Golden Circle announced it would close its Mill Park plant in 2014 with a consequent loss of over 120 jobs.

Mill Park’s northern boundary adjoins South Morang, and just inside Mill Park there is the Westfield Plenty Valley regional shopping centre with a Myer department store and over 140 other shops.

Mill Park’s census populations have been:

The resident’s religious affiliations at the 2011 census included: 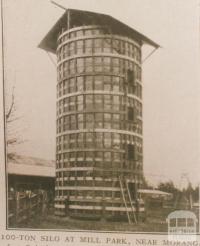