Mincha is a rural locality 8 km north of Pyramid Hill on the railway line to Robinvale. The name is thought to be derived from an Aboriginal word meaning bush turkey.

The taking up of farm selections in the 1870s resulted in three district schools being opened during 1877-81. After the railway line from Pyramid Hill was extended through Mincha in 1884 a school was opened near the station in 1909, replacing the three previous schools. The extension of irrigation to the district enabled dairying to be included in farm activity, and Mincha continues to be a dairying district. A butter factory was recorded in the Victorian municipal directories, 1910 to 1945. It closed in 1949 when production was concentrated at Pyramid Hill. There have also been a railway workshop, a hotel, a store and a public hall.

The Mincha West school was the last to close in 1991.

Mincha’s census populations have been:

At the 2006 census, the last for which Mincha is recorded, farming accounted for 37.9% of local employment. 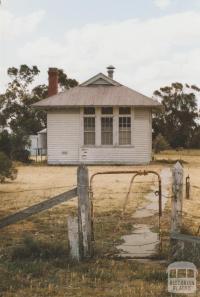 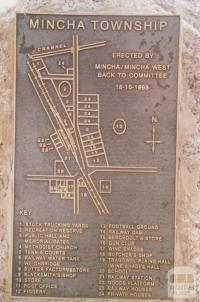