Mitchell Shire (1994-), central Victoria, was formed on 18 November 1994, by the union of most of Seymour rural city, Pyalong shire, Kilmore shire and most of Broadford and McIvor shires. Its area is 2862 sq km. The name celebrates the explorer Thomas Mitchell, the New South Wales Surveyor-General who travelled through the area in 1836.

The shire’s southern boundary is on the lower southern slopes of the Dividing Range near Kinglake and its northern boundary is near Nagambie. Running northwards, through the shire, but bypassing its main town Seymour, is the Hume Freeway. The standard gauge railway follows much the same route, passing through Seymour. The Northern Highway goes north-westerly to Kilmore and Pyalong, linking the shire to Heathcote just outside the shire’s boundary.

Quite a lot of the shire is hilly woodland, west of Seymour and east of Wandong. The shire’s centres of population are along the Hume/railway corridor, beginning in the south at Wallan and thence Wandong, Kilmore, Broadford and Seymour.

During 2001-06 the main population growth points were the towns nearest to Melbourne, Wallan, Kilmore and Wandong/Heathcote Junction. In 2012 moves were afoot for residential growth around Beveridge 37 km from central Melbourne, closer than Wallan or the others.

Mitchell Shire’s census populations have been: 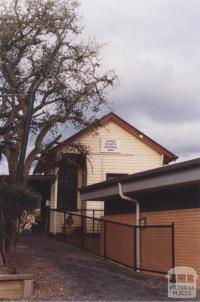