Montrose is a suburb 33 km east of central Melbourne. Its eastern boundary is along the foothills of the Mount Dandenong Range and its northern and western boundaries adjoin Lilydale and Kilsyth respectively.

Although the western foothills of the Dandenong Ranges are well watered, they are not of high fertility. Nevertheless, by the 1880s the area of Double Pitts, Mooroolbark and Mooroolbark South (now Montrose) was taken for farm selections. Mooroolbark South primary school opened in 1880. A general store built in 1891 was named Rose Mont, which has been suggested as inspiring the name of the locality. The name Montrose appears to have arisen as a locally preferred name as early as 1893, and in 1900 the school was given the name. By then many farmers were established as orchardists and Montrose village had a Methodist church (1888), two stores and a post office. An Anglican church and a Church of Christ followed in 1908 and 1909 and a Progress Association in 1911. On the eve of the World War I a public hall was opened, with space for a circulating library. Seven years later a war memorial was unveiled.

The land at Montrose receives regular rainfall, about 60% more than Melbourne, which encouraged orchards, nurseries and cut flowers. After World War I Montrose's distance from Croydon railway station became less of a disadvantage. Motor transport brought tourists and stimulated land subdivisions. Land sales were unspectacular, however, and orcharding continued, but by the 1920s some new houses and weekenders were evident. The landscape attracted excursionists and artists including William Blamire Young who died near Montrose in 1935.

In the immediate postwar years Montrose was a rural community with locals running roadside stalls to tap the passing tourist traffic to the Dandenong Ranges. During the 1920s there were residential subdivisions in Montrose. Some had weekend houses put on them, as Montrose was not far from the Mooroolbark railway station and motor cars could cope with Mount Dandenong Road. There were also local industries: the Montrose firebrick company in Montrose Road (1926) and the Grand Vue guesthouse.

Soon after the end of World War II Montrose’s population grew, especially school-age children. A baby-health centre (1949) and an extra school room (1956) signalled Montrose’s coming role as a dormitory suburb. Reticulated water was installed in 1958. Even so, the nearby forested hills could be a fire danger and 23 houses were burnt down in 1961. There was a steady increase in population and old-time residents sensed that Montrose’s bush environment could disappear. There was a government buy-back of steep land holdings, and the Progress Association was overshadowed by the Environmental Group (1971). There are five bush reserves and two linear reserves. The pressure on the primary school and its portable classrooms was relieved when Billanook State primary school opened in 1980. In 2014 Montrose primary school had 455 pupils and Billanook primary school had 398 pupils.

Local residents have a keen sense of preservation and have supported the building of a community centre and the relocation of a pioneer cottage. All are centred near the shopping area at the corner of Mount Dandenong and Swansea Roads. There is also a garden in memory of Montrose’s Kevin Heinze, a popular garden program presenter on television and radio.

Montrose’s census populations have been: 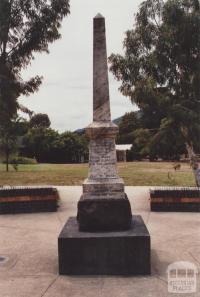 Montrose from the Dandenong Ranges