It is thought that the name derives from an Aboriginal word meaning hill.

The mountain served as a landmark for ships entering Port Phillip Bay, and its sides were planted with vineyards when Geelong was a wine region before the phylloxera infestation in the 1870s.

The land around Mount Moriac was suitable for small and medium size farms and a strong Catholic community developed there. A Catholic school was opened probably as early as 1849, and certainly by 1853. The Catholic church was built in 1863, large enough for 350 people. (Destroyed by a cyclone in 1926, the foundations and furnishings were re-used for the present church.) Mount Moriac became the district's administrative centre with police, a court and the road board offices. By 1865 there was also a flourmill, several shops, Barrabool Shire offices, a hotel and Presbyterian and Bible Christian churches. A State school was opened in 1875. Mount Moriac was described in the 1903 Australian handbook:

In 1877 the Geelong to Colac railway line was opened and a second township, Moriac, grew around the railway station. Shortly after 1900 two large pastoral properties were subdivided into small farms around the station, causing a population influx. The Moriac primary school was opened in 1922.

Although the railway station might have caused the new village to grow at the expense of the one on the road, the presence of shire offices, hotel and churches at the old site forestalled that occurrence. Paradoxically, as postwar road traffic outgrew railway traffic, urban settlement at Moriac increased. Rural/residential subdivisions at Moriac attracted new families, perhaps drawn by the undulating landscape, good views and well established windbreaks.

Mount Moriac's importance lessened as the shire offices moved to Geelong (1949) and Council meetings in the old shire hall finally ended in 1976. The hall was demolished in 1989.

Moriac's population grew from an estimated 150 in 1950 to 250 in 1960. Its facilities include shops, pre-school and school buildings, Uniting church and tennis courts. The Catholic church, the public hall and the hotel (rebuilt in about 1988) are on the highway. 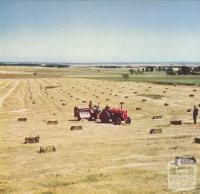