Mount Beauty, a township situated in the Kiewa Valley in north-east Victoria, is 75 km south of Wodonga.

Mount Beauty was established by the State Electricity Commission of Victoria (SEC) in 1947 as the works headquarters for the Kiewa hydroelectric scheme. It superseded Bogong, which had been established in 1938, further upstream on the Kiewa River.

The township is situated in the Kiewa Valley at an elevation of about 370 metres, overlooked by a steep mountain spur which was named Mount Beauty by an early settler. The SEC planned Mount Beauty as a model township with reticulated water, sewerage, a school (1948), a hospital (1958, transferred from Tawonga), a shopping centre, sports facilities and a worker's club. By 1952 nearly 500 houses were built. A high school was opened in 1964.

The Kiewa hydroelectric scheme was completed in 1961 and the SEC sold its timber mill and a substantial number of the houses. In 1957 it had transferred management of the town to Bright Shire. The town also underwent a transfer of its local economy from government employment to alpine tourism. A motel, holiday flats and a caravan park were built.

Since the mid-1980s Mount Beauty has concentrated tourist accommodation in its township.

Mount Beauty has also become something of a retirement location and in the 2011 census the median age of residents was 45 compared with the Australian median of 37.

Mount Beauty's census populations have been:

Horseriding and Mount Bogong from the Pondage Lake, Mount Beauty

Water ski-ing and Mount Beauty township from the Pondage Lake 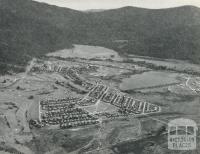 Looking at Mount Beauty township and Mt Bogong from the power lines, 1979