Mount Buller, a large alpine resort, is 150 km north-east of Melbourne and 35 km east of Mansfield. The travel distances are considerably further as they pass through the Great Dividing Range.

Mount Buller was probably named by the New South Wales Surveyor-General, Major Thomas Mitchell, on his Australia Felix expedition in 1836. Mitchell was acquainted with Charles Buller of the Colonial Office. The first recorded European ascent of Mount Buller was by the Government botanist, Dr Ferdinand von Mueller, in 1853.

During the 1870s the Klingsporn brothers had a grazing lease which included the Mount Buller slopes. In 1913 Frank Klingsporn cut a track to the summit, with the object of developing the area as a tourist resort. In 1924 the Ski Club of Victoria was formed and its members found ski fields at Mount Buller superior to any others known in Victoria in June of that year. A ski chalet was built at Horse Hill (east of the present alpine village) in 1929. An international ski championship was held at Mount Buller in 1937.

The Mount Buller Alpine Recreational Reserve Committee of Management was formed in 1948 to advise the Forests Commission on the development of a ski village. Seven ski lodge sites were allotted. Ski tow sites, leases, rents and building standards were soon agreed. The first ski tow began in July 1949.

The Mount Buller Resort has the mountain summit (1804 m/1762 m) at the eastern end. The alpine village is about 2 km down slope to the east. Between the summit and the village is a ridge with numerous ski tows and runs traversing the northern and southern slopes. One run, known as Bourke Street, dates from 1947 when a skier remarked that on the busy King’s Birthday weekend the run was busier than Bourke Street (Melbourne). His remark betokened Mount Buller becoming Australia’s busiest ski resort.

At the eastern edge of the village are One Tree Hill and Horse Hill. About 4 km north-east is Mount Stirling, the site of proposed further expansion of the ski resort. A sealed road between Mount Buller and Mount Stirling was proposed in 2014. A further 4 km north-east is Clear Hills, where The Man from Snowy River was filmed in 1982. Other places which are nearby are Saw Mill Settlement and Mirimbah on the Mount Buller Tourist Road.

The Alpine Village has a primary school (1966), post office, religious chapel (1993), an alpine museum (1999), supermarket, numerous shops, restaurants, cafes, and a wide choice of accommodation. La Trobe University and the Australian Alpine Institute had a campus there from 1998 to 2008.

There are about 160 ha of skiable area of which 40 ha are serviced by snow-making equipment. In 1993 the Alpine Resorts Commission built a separate water catchment for snow-making. Winter visitation to Mount Buller varies with the seasons: in 1993 there were 136,000 visitor days and in 1990 there were 510,000. The ten-year average is about 375,000 visitor days a year. Mount Buller, as part of the Australian Alps, was added to National Heritage listing in 2008.

Mount Buller has been developed for summer recreation, including tennis, horse-riding, abseiling and climbing.

Mount Buller’s census populations have been:

Jim Darby, Mount Buller: the story of a mountain, Bright, 2008 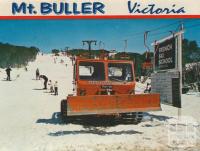 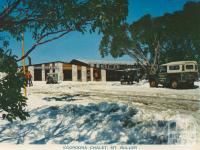 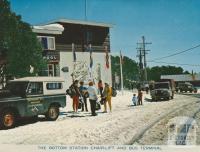 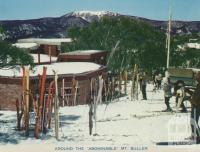 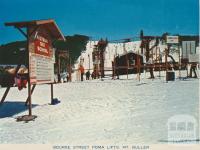 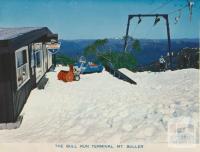